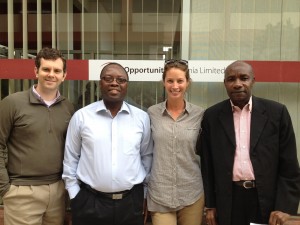 At the end of August, Christy Turlington Burns, Opportunity International partner, model and philanthropist, took a day out from her family vacation in Tanzania to see our Arusha branch. Christy is the founder of Every Mother Counts, an advocacy and mobilization campaign that increases education and support for maternal mortality worldwide, and the director/producer of the documentary film, No Woman, No Cry. In Arusha, she met with staff and clients, including Stanley Tsikirayi, CEO of Opportunity Tanzania; Esther John Mark, Arusha Branch Manager; Ryan Lynch, general manager of MicroEnsure; as well as clients Ester Moses, who runs a local health clinic, and Lydia Mwakalinga, a restauranteur who has a child and grandchild with HIV. “I was delighted to finally visit Opportunity Tanzania’s Arusha branch,” Christy says. “I had filmed No Woman, No Cry in this region in 2009 right around the time when they opened in Arusha. I was especially eager to meet Lydia and Ester, whose enterprises are thriving today because of the loans and critical support they received from this program.” 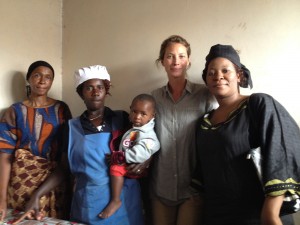 In Tanzania, in addition to loans and financial training, Opportunity’s microinsurance subsidiary MicroEnsure offers clients health insurance with low annual premiums, with plans connected to a network of local clinics. Individuals and families who previously didn’t have adequate medical services now have immediate access to care for HIV/AIDS, malaria, malnutrition and more.

It was so great to share our work in Arusha with Christy, to introduce her to our branch and to a few of our women clients who are using Opportunity services to transform their health and their futures!