Chicago Premiere of No Woman, No Cry, Directorial Debut of Christy Turlington Burns

Yesterday afternoon, YAO members, members of the Board of Governors, several of my colleagues and I went to the Chicago premiere of Christy Turlington Burns‘s directorial debut, the powerful documentary “No Woman, No Cry.” It’s part of the Every Mother Counts campaign, which raises awareness and support for maternal health issues worldwide. In her film, Burns shares the stories of at-risk pregnant women in four parts of the world: a remote Maasai tribe in Tanzania; a slum in Bangladesh; a post-abortion care ward in Guatemala; and a prenatal clinic in the United States.

This was a private screening at the Gene Siskel Film Center hosted by suburban Chicago-based company Lifeway Foods, Inc. There was a post-film Q&A with Burns and Lifeway CEO Julie Smolyansky, moderated by Jane Saks, executive director of Columbia College Chicago’s Institute for the Study of Women and Gender in the Arts & Media. The event was attended by 200 local nonprofit and business leaders, and members of the media, interested in women’s issues.

Burns opens “No Woman, No Cry” with her recollections, and home video footage, of the complications from the birth of her first child several years ago. While she received care and recovered within a few days, left only with the emotional scars from those terrifying moments, she was shocked to learn that hundreds of thousands of women die each year during childbirth around the world—and that 90% of these deaths are preventable. Each of the four subsequent segments in the film featured women living in cultures or communities that presented their own unique barriers to better maternal health, whether they be cultural or financial.

In the slums of Dhaka, Bangladesh, Sabina Faiz Rashid Ph.D. of BRAC University says that maternal mortality and health is not always about facilities and lack of access. Sometimes it’s about the assumptions and attitudes that influence the health choices made by people in poverty. In the case of Monica, she insists on having her baby at home with an untrained mother’s aid instead of heeding the advice of her local BRAC health worker by going to the nearby, relatively well-equipped hospital. Monica makes this choice because of the social stigma of being seen in public in her condition, and because of the widely held belief in the slums that hospitals were dangerous and risky places, only to be braved if absolutely necessary. Indeed, when she had gone into the hospital for a sonogram in her ninth month, the male doctor admonishes her female health advocate from BRAC and ignores Monica completely while his nurses examines her.

In Tanzania, mother Janet has a different barrier. She has no qualms about going to the local clinic, and when she has strong pains that she thinks are labor, she goes on foot to get care. When these turn out to be false labor, she must make the arduous trek back home. Finally, when she comes in again and the nurse tells her she needs the facilities at Mt. Neru Hospital, she’s willing to go but has no money and no transportation. Burns and her film crew arrange a car to take her to Mt. Neru (in a breach of cinema verité and an intervention that wouldn’t please documentary purists, though it speaks to Burns’s compassion for her subjects).

The U.S. segment featured one couple’s sad personal story, but frankly, it shocked me as much for the statistics. The U.S. ranks at a deplorable 50th in maternal mortality in the world despite the fact that it spends more on healthcare per capita than any other nation in the world, and an astonishing two women per day die from pregnancy complications here. For the 20% of U.S. women without health insurance, even a healthy, uncomplicated pregnancy can cost thousands of dollars. The irony, Burns tells us as the narrator, is that though maternal healthcare is not readily available elsewhere in the world, if it can be accessed it’s often free. In the U.S., where quality healthcare is abundantly available, it is anything but. 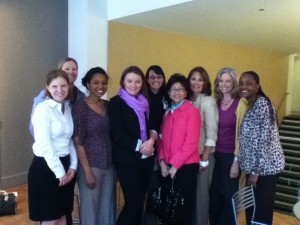 In Guatemala, Dr. Linda Valencia, who is herself eight months pregnant, is a compassionate caretaker, talking through family-planning options with her impoverished patients in an honest, open way that treats them as equal partners in their choices. In a country where abortions are controversial, she’s working to be sure women have the facts about the procedure, and to reduce complications should they choose to get one by offering good post-abortion care. Linda says, “I need to get rid of the authoritarianism and paternalism of a doctor who tells women what to do.”

In addition to the learnings from the film, the Q&A afterwards was thought-provoking. Smolyansky, the youngest female CEO of a publicly-traded company and a recent traveling companion with Burns to Bangladesh, discussed women’s issues with enthusiasm, laced with occasional indignation. Saks, a seasoned educator well-versed in these issues, mediated the discussion with control and wisdom. And Burns was remarkable not only for her passion but for her grace and poise on the panel. She seemed thoroughly unflappable, and though none of the questioners in the audience were remotely confrontational, I became convinced that even with less-civil audiences, she would be unruffled.

“No Woman, No Cry” is very well-done and raises critical questions about the needs for maternal health both at home and abroad. If you have the opportunity to see it, you should do so. After all, remarks Burns in the Q&A, maternal health is fifth on the list of Millennium Development Goals and as human beings, we have all been affected by childbirth at least once. This is an issue that affects us all.