If you attended Opportunity’s 2014 National Summit in October, thank you for your valuable contributions to the event!

In total, 350 people participated. Our Governors’ community engagement in the Summit was extraordinary. You are our committed champions.

Even if you couldn’t attend, it’s not too late to claim your front row seat at the Summit! Set some time aside with your family to watch highlights of key speeches and panel discussions. Watch the inspiring videos! 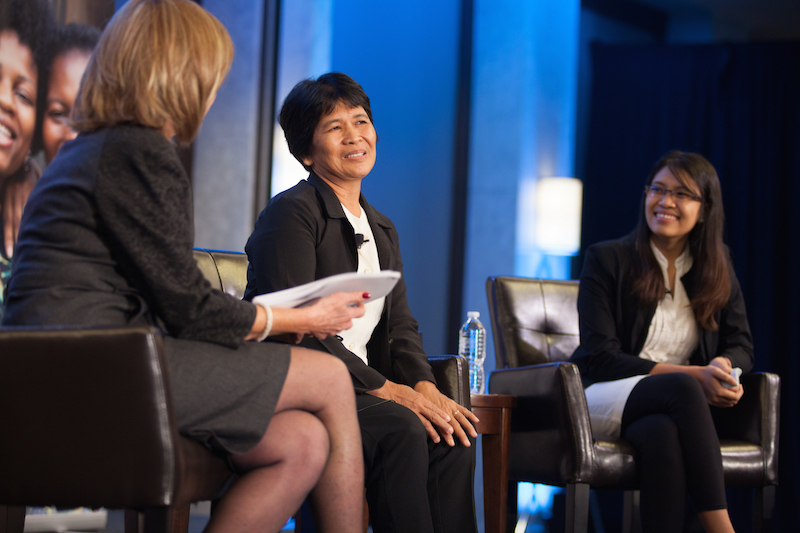 Remy and Amina Mendez of the Philippines speak with Vicki about what you have made possible in their lives. For many attendees, their discussion was a high point of the Summit. You’ll be moved by what they have to say – discover the video at https://opportunity.org/national-summit-2014/videos/.

Mother and daughter Remy and Amina Mendez shared the stage with Vicki for a candid conversation about poverty and transformation.

Before becoming involved with Opportunity Philippines, Remy’s family was desperately poor. She had to leave her young daughters from dawn until dusk while she worked as a farmhand, earning just a few dollars a day.

With Opportunity loans, Remy started and expanded her own pig farm, as well as launched side businesses making hats and selling rice. In all, she’s successfully completed 20 loan cycles over the past ten years.

But her best investment, she says, has been in her children’s education. Her younger daughter graduates from college this year with a teaching degree. Her older daughter Amina, also a college graduate, is now working as a Corporate Giving Officer for Opportunity in the Philippines.

“I have been the daughter of a client, and now I am an implementer on the ground,” said Remy. “It's great to see the faces of the people who have invested so much. I want to say to you that what you are doing matters – not just to the families that are receiving the loans, but to their children, and the children after that, who may never know the name of Opportunity International – because they won't be poor anymore, and they won't [need] loans anymore.”

Watch Remy and Amina speak and hear these remarkable women tell you what your support has meant to their family.

Liesel Pritzker Simmons presented the Blue Haven Initiative Young Visionary Award to Katherine Haley, an Opportunity Governor and Co-Chair of YAO-DC. Katherine received the award for her leadership of the Young Ambassadors for Opportunity community in Washington, DC and for her advocacy for Opportunity among her network. For the past two years, she has been Opportunity’s top fundraiser during the Live Below the Line challenge. An Insight Trip to Nicaragua in 2012 deepened Katherine’s engagement in Opportunity. Katherine currently serves as Assistant for Policy for House of Representatives Speaker John Boehner. In this role, she is responsible for developing policy and coordinating strategies for education, workforce and social issues. 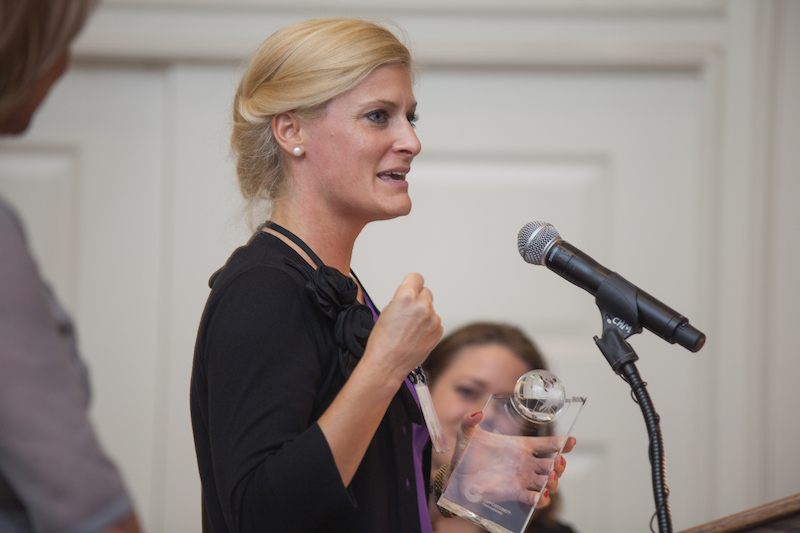 The Alfred Whittaker Founder’s Award was given to David and Donna Allman. The award was presented by Don Whittaker, and it was accepted by David Allman on behalf of himself and his wife Donna. Seven years ago, the Allmans approached Opportunity with the idea of creating a new program in Nicaragua. They started with the premise that even the poorest families have assets to contribute to the development of their community. Thanks to the Allmans’ ingenuity and generous contributions, school libraries are open, churches are repaired, roads are built, and clean water flows through new aqueduct systems. David is Chair of Opportunity International, Nicaragua. In addition, David and Donna are closely involved in the Ambassadors Council. 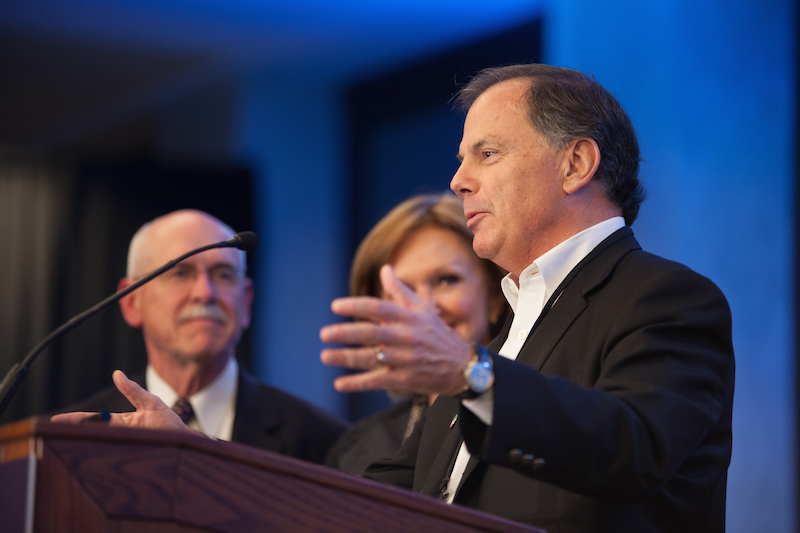 The Weberg Foundation Award went to Mary Lynn and Warren Staley for their significant contributions to Opportunity. Mary Lynn is the former chair of the Governors community. She and Warren, who recently retired as CEO of Cargill, have witnessed the devastating effects of global poverty and know that microfinance is a sustainable solution. In her presentation of the award, Governor Gail Bradley quipped that while the Staleys were with Cargill, no one left the company plane without hearing from Mary Lynn about Opportunity, her admiration for the organization and the possibililties of their own personal involvement. Today, Warren is on Opportunity’s Agriculture Campaign Taskforce and Mary Lynn serves on the Education Campaign Taskforce. The Staley’s three children are also Governors, and they hope to see their seven grandchildren one day following suit.

As recipient of the Women’s Leadership Award presented by Governor Janelle Lassonde, Julie Hindmarsh was recognized for her leadership and philanthropy. In honor of her mother Millie, Julie established “Millie’s Fund,” which has fueled Opportunity’s launch of an education finance program in Tanzania. Millie Hindmarsh was a lifelong advocate for empowering women. In her remarks, Julie said that she “stands on my mom’s shoulders,” and is forever inspired by her mother’s motto, “To teach is to touch a life forever. Teaching is loving.” 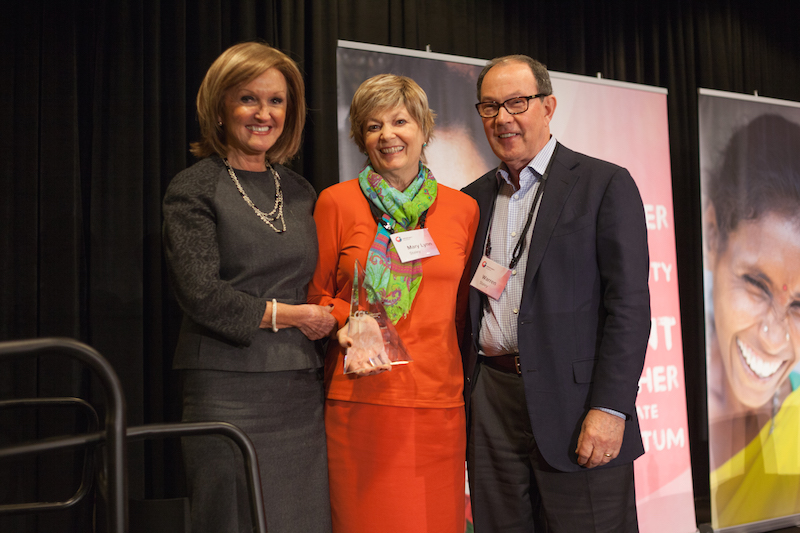 Reeta Roy, President and CEO of the Mastercard Foundation, received the Strategic Partner of the Year Award on behalf of her organization. “It is gratifying for our Foundation to be regarded as a strategic partner by Opportunity International,” Reeta wrote on the Mastercard Foundation’s blog. “It implies we are doing more than achieving the targets of our programs. It implies we are working in a way that enhances the performance of both organizations and creates value for farmers and the rural poor, who are empowered by our programs in Africa.” 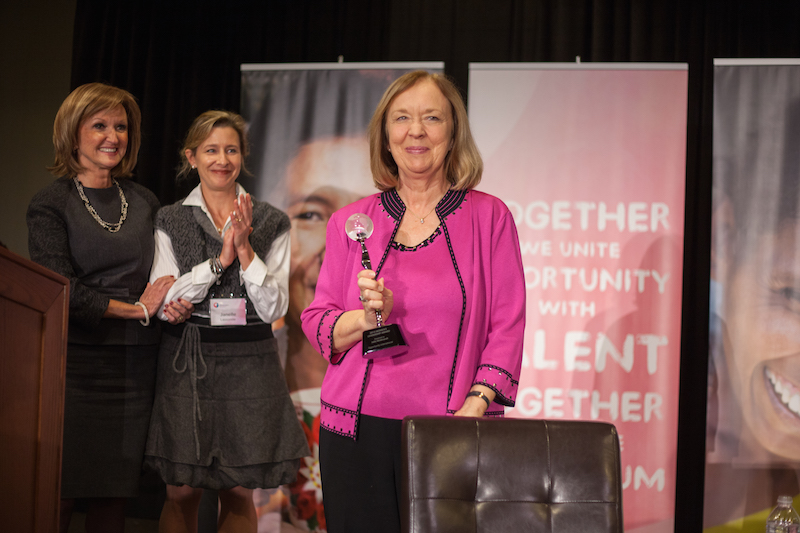 Back to Governors Newsletter