“Innovative fashion entrepreneur” may not be the first words that come to mind when meeting Janet Asamoah. You probably won’t see her in London, Paris, or Milan wearing the latest from Vera Wang or Stella McCartney.

But after 10 minutes of hearing her story, it becomes evident she is an executive focused on success and taking advantage of mobile financial services to achieve it.

Janet sells used clothing on the streets of a community near Accra, the capital of Ghana. While her bright smile and engaging personality help her stand out among other “hawkers,” this single mother of three has two much more important tools in her business toolbox: a mobile phone and training from Opportunity International. 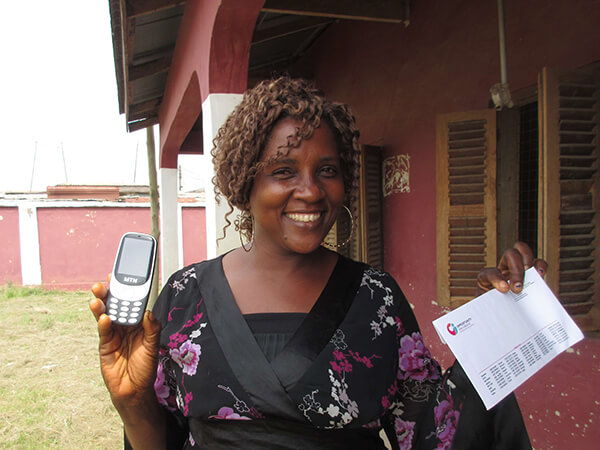 Janet personifies Opportunity’s Digital Inclusion Strategy, which aims to bring the mobile revolution to underserved groups whose members have historically been on the wrong side of the digital and economic divides. The strategy empowers individuals by fostering a greater sense of wellbeing and by providing more and better opportunities. Consequently, an individual's journey out of poverty is accelerated as it becomes a digital journey. But despite such progress, there are countless women who are unserved and under-served. They are unable and, in some cases reticent, to embrace technology to advance their lives. Indeed, 1.7 billion females in low- and middle-income countries do not have mobile phones. Consider:

Those women who do use mobile banking generally deal in lower transaction amounts and use less sophisticated features. Why? Surveys and focus groups in Ghana have found that women have: a higher degree of risk aversion; a lack of confidence to use digital; and practical concerns about the privacy of financial information. In conducting this research, Opportunity staff heard several recurring comments:

“I am illiterate, so I cannot do it.”

“I am afraid I'll forget my pin code.”

“I am too busy to learn or ask for help.”

“The menu is so long and complicated.”

“I don't know where I can withdraw my money.”

And one that underscores the importance of women meeting in groups, sharing their experiences and learning from each other: “If we use the phone to make repayments, we won't meet as a group again.”

To some, these hurdles to success may appear daunting, especially in communities where levels of education among women often are in the single digits. But, Opportunity recognizes its commitment to those it serves – and those it seeks to serve – in helping contribute to the end of extreme poverty in bringing digital services further down the income curve. Specifically, for women and their embrace of mobile technology, the organization is employing a three-prong approach to achieve its Digital Inclusion Strategy. 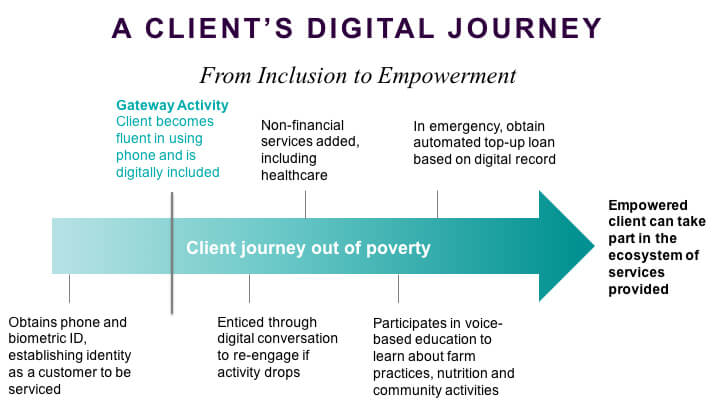 More than a half million clients in Africa are involved in Digital Inclusion and another 3.7 million in Asia. In addition, Opportunity has reengaged inactive clients, resulting in higher total savings balances. Another project, launched last September, uses an interactive voice response system with messages recorded in clients’ local dialects, thereby reaching and engaging those with low literacy levels.

Melinda Gates, co-founder of the Bill & Melinda Gates Foundation, has witnessed the transformative power that women can have on local economies, communities, and families. In a New York Times commentary, she wrote:

Women make up half the population. So it is obviously a huge wasted opportunity whenever women are isolated from the economy. However, when women are empowered as economic actors, the benefits touch everyone. Economically empowered women are one of the important engines of growth in developing countries, and they play a central role in building prosperous communities.

Ms. Gates could have had Janet in mind when she wrote those words.

Rosa Wang joined Opportunity International in November 2012, as Director, Digital Financial Services. She sees mobile technology as the key which will unlock the full potential of microfinance. As Director of Digital Financial Services, Rosa is responsible for driving the development, management and promotion of mobile banking products within the Opportunity International Network in a strategic, coordinated and effective manner.

Previous Article
Infographic: The Power of a Tablet
Back to Blog
Next Article
My First Time in the Field