Not So Small Change: Meeting Opportunity Clients in Colombia 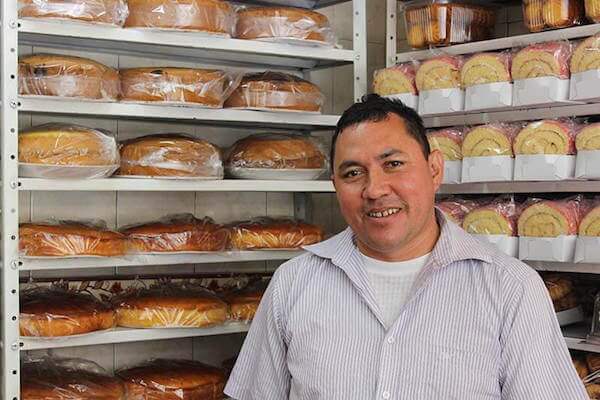 I sat in the window seat watching the landscape change from paved roads to dirt and brick homes to lean-tos as the bus wove its way up the mountains of southern Bogota. Next to me sat Yaneth, a former guerrilla rebel who now serves as the group lending manager in one of Opportunity’s branch offices. At the top of the mountain, the wind swept our hair and chilled our bones. We tiptoed over discarded garbage that littered the potholed road and made our way to Nubia’s home, then Maria’s. We saw unimaginable poverty, but we also saw fearlessness and bravery and hope. We saw beautiful people doing incredible things. And we saw Opportunity’s work in action.

And that was just day one.

I had the honor of spending the last two weeks traveling around Colombia, meeting Opportunity’s clients and staff and capturing their stories. I sat across from women and men in their homes and businesses listening to them describe how their lives have changed from working with Opportunity.

It never gets less inspiring.

I met Andres and Sorony – a husband and wife who found themselves pregnant as teenagers. They had to forgo the rest of their educations to work to support their daughter, Helen Sofia. Sorony could have easily become a statistic, but she refused to let her beautiful daughter be anything but a gift to her family. She began doing hair and nails in the community, and soon discovered Opportunity International. Armed with a loan and a Trust Group full of encouraging friends, she got to work – literally. Now, she manages her own fledgling salon business and raises smiley and silly two-year-old Helen Sofia.

I visited Jose, a baker who turned his small street stall stocked with cakes and pastries into a three-story enterprise that employs nine people and sells over 600 items a day.

Denis talked about the money lenders in her community – people who charge exorbitant interest rates and physically attack people who can’t pay. She spoke with such gratitude about Opportunity providing an alternative, safe, fair form of capital in her community. And she respects Opportunity so much that she now serves as her Trust Group president, encouraging others to get involved. Recently, she received a Roof and Floor loan to improve her kitchen, and now she is dreaming about additional home renovations.

Many of my conversations with clients and staff were shaped by the decades-long violence that has plagued the entire country.

Idlema and her five daughters were displaced by the violence and resettled in southern Bogota. But while she was able to escape the guerrilla warfare, she could no longer bear the constant violence, crime and danger that surrounded and affected her young children. Thankfully, Idelma slowly started building relationships in her new community which provided her with much-needed social capital. One of those neighbors introduced her to Opportunity, where she got a business loan and training that she is using to build a general store in the front of her home. What’s more, she now has a community – a team – of people to support and encourage her.

Each person responds to their personal experiences with the violence differently. When I sat across from Ingrid, she fought back tears as she described her old home. Her family was forced to give up their farms, and while she is so proud of her clothing business that allows her to raise her baby and send her two older kids to school, she is also overcome with grief for all that they have lost.

Dionel, on the other hand, remembers the past with horror, but looks ahead to the future with so much optimism. As we sat in his cement block home with his wife Ludy, he beamed as he told me about his kids and his family. When I asked if I could take his photo, his disappeared behind the curtain that separates the bedroom from the rest of the house and appeared a minute later wearing a clean shirt and a traditional Colombian hat – ready to pose and model for the camera. He and his wife have had a decidedly challenging life. Neither has ever attended a single day of school. As children of farmers, they have never stepped foot in a classroom and cannot read or write – not even their names. But now, thanks to their new farm where they grow yams and yucca and corn thanks to Opportunity’s loans, savings and training, they are sending all three of their kids to school. Their children will have opportunities that Dionel and Ludy never even considered.

When I left Dionel’s house, he handed me a bracelet he had made – it was black and white and woven from pieces of palm branches, and he was offering it to me as a gift. I politely declined, encouraging him to sell it instead. But he insisted, placing it on my wrist.

He was, I now realize, showing his gratitude. Not to me, personally, of course, but to me as a representative of Opportunity. As the person who happened to be sitting in his home, listening to him share his story.

Because Opportunity’s work is so much more than impressive statistics and macro-level economic change. It is those things, too, yes. But it is also the individual stories and the personal, tangible lives that are dramatically different today than they were six months or three years or two decades ago.

When I sit down across from a client, pen in hand, and say, “Tell me about your life,” that’s what I’m celebrating. The broad-scale transformation, but equally as valuable, the small change. The change in one life, which then changes a family, which changes a community. And as I’ve seen time and again, the small change matters. The individual lives matter. They inspire and amaze and showcase the incredible work that you make possible through Opportunity International. The small change in each singular life that is impacted by a loan or a savings account or business training.

And it turns out that small change isn’t small at all.

Allison Kooser is traveling around the world meeting, interviewing and being amazed by Opportunity International clients. She spent two weeks in Colombia, traveled to Mozambique and is off to Rwanda next. Follow along as she travels on Instagram at @opportunityintl.