“The Opportunity International Conference changed my life,” says Young Ambassador Samantha Snabes. The fall 2011 conference, says the NASA “social entrepreneur in residence,” was the moment when she became inspired to take action to do her part to end global poverty. Shortly thereafter, she became part of Young Ambassadors for Opportunity (YAO) and is currently working to launch a YAO chapter in Austin, Texas, where she lives. Now, as we chat, Sam can hardly contain her excitement about enabling technologies that smallholder farmers, like Opportunity International’s agricultural finance clients, can use to grow more soil-suitable crops, in greater quantities, for consumption and sale. Through her work with Opportunity Nicaragua’s yucca processing plant, Engineers Without Borders, and platforms such as Pineapple.org, she’s determined to crack the code, literally, on improving food security.

Smallholder farmers make up 50% of the world’s hungriest people, and technology is at the forefront of empowering these farmers to feed themselves and their families, and to earn a higher income. Opportunity International continues to develop agricultural finance tools that can be critical to helping farmers in a variety of climates and growing conditions increase their crop yields.

Sam saw firsthand the challenges of smallholder farmers in the developing world when she visited Rwanda with Engineers Without Borders-Johnson Space Center. Then, in December 2011 and again in March 2012, she went to Nicaragua to see Opportunity’s yucca processing plant, meeting Executive Director David Kone and Program Director Geralyn Sheehan. Among the innovations Sam found inspiring was David’s pride and joy: an innovative new way to dry and process yucca in order to store and sell it. 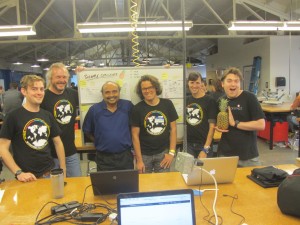 Since returning from Central America, Sam has been hooked on innovating to feed more people and make a better life for those in poverty. In April 2012, she embarked on a series of coding, programming and philanthropic hacking competitions to contribute technological solutions to the problem of chronic hunger and food insecurity in the developing world. The first event was the 48-hour NASA International Space Apps Challenge, one of the “world’s largest hackathons.” Fondly called the PineApple Project, her challenge generated an international community of solvers, several in developing countries, eager to collaborate. It won “The Most Disruptive Global Award” and was a runner-up for the competition’s People’s Choice prize. The PineApple Project is designed to help farmers and policymakers decide what crops to plant and where to plant them. Technology like the PineApple Project and Opportunity’s agricultural finance tools are critical to helping farmers in a variety of climates and growing conditions increase their crop yields so they can earn an income and better feed their families. 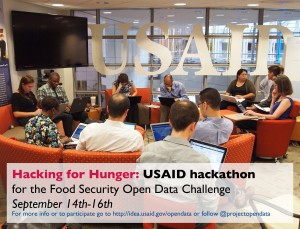 Soon after the Space Apps Challenge, the PineApple Project’s newly formed team reconvened at Random Hacks of Kindness where they won the San Francisco Cross Hackathon award. In September the challenge was included in USAID’s Hacking for Hunger codeathon, an online and in-person mashup of participants from five countries that included volunteer programmers, designers, storytellers and development experts working around the clock. At the event, Sam’s team was recognized again but also received some harsh feedback: the solution was too simplistic to be realistically applied to the needs of smallholder farmers. Optimizing planting decisions was more complex than her prototype, she realized. There were great risks posed by climate change and more information was needed about crop rotation. Temperatures change drastically from year to year and variables such as market pricing influence planting decisions. These concerns are what prompted Opportunity to develop its data-collection methods and services for farmers such as GPS mapping, inputs of high-quality seed and fertilizers, market linkages and weather-index crop insurance, and it’s exciting to see how Sam’s innovative work also collects data to help meet the needs of farmers.

The USAID judges recognized the PineApple Project’s progress and admired the team’s enthusiasm and youthful idealism. Following Hacking for Hunger, USAID made valuable connections to INSEAD Business School and data experts, inviting Sam and Selena Georgiou of Growers’ Nation to The Iowa Hunger Summit (an event established by the World Food Prize Foundation), where she presented at the Open Data Showcase. Thanks to Hacking for Hunger, the PineApple Project was able to refine and expand its food and farming database with open data sets. Sam’s goal is that by January 2013, everything on the site will leverage geolocation, with accurate and relevant average temperatures, rainfall and topographical data. Soil data will also be included but, as it is notoriously difficult to determine because of variables such as runoff and fertilizers, she says her team is now evaluating Bayesian assessment tools (that is, probability-based hypotheses). They also are considering using SMS data to determine market pricing and pest information, though this can be costly without the support of a strategic partner.

Based on responses to the project’s community recruiting tool, root2market.org, Sam’s team has identified a market for their work and has the science and user testimonies to support the need. Today, the project is also made possible by her partnership with Phil Parker at INSEAD, Geeks Without Bounds, Softlayer, and sister project Growers’ Nation out of the MetOffice UK.

Speaking to Sam, I know I’m in the presence of a rare type of person: brimming over with idealism but with the smarts, experience, know-how and problem-solving skills to make headway on the causes she cares deeply about.

Sam personifies the power of one individual to impact thousands, and we’re thrilled to have her in the Opportunity family.