Today on World Food Day, there’s Hope for an End to Hunger

"Globally, nearly 870 million people are undernourished–about 12% of the world’s population."

It’s World Food Day and social media is buzzing with challenging facts and stats about hunger, like the ones in this post. This information is important. There’s no doubt that it’s one of the great injustices that children anywhere go to bed hungry, that women compose a disproportionate amount of malnourished people, and that smallholder farmers make up half of the world’s hungriest people. But there’s also hope. If countries and NGOs step up their efforts, we can still reach the Millennium Development Goal of halving the proportion of hungry people by 2015, FAO Director-General José Graziano da Silva announced at the opening session of the Committee on World Food Security (CFS) yesterday. 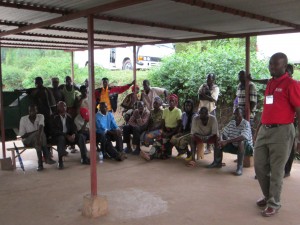 The theme of this year’s World Food day is “Agricultural Cooperatives – Key to Feeding the World.” Cooperatives and organizations can be the key to ending world hunger, helping to provide food security, generating employment, and lifting people out of poverty. In his official World Food Day message for the FAO, da Silva says that for NGOs, agricultural cooperatives are “natural allies in the fight against hunger and extreme poverty.” With a decline in national investments in agriculture, millions of small producers struggle to cope with crises in climate, markets, and prices, especially during global food shortages like the one in 2007-2008. Though many countries have renewed their commitments to ending world hunger, concrete support often lags behind these verbal promises.

"Half of the world’s hungry people are from smallholder farming communities."

Most of the world’s smallholder farmers are struggling to live and feed their families on less than $2 a day. According to IFAD, many have not been able to respond to increased demand because they lack access to assets and capital, and they face higher transaction costs, which makes it difficult for them to adapt and respond quickly to market changes. Smallholder farmers don’t compete on equitable terms with big commercial growers. Often, they lack access to markets because roads are poor or transportation is too expensive and higher food prices don’t always filter down to them. They often have to shortsell their produce to make ends meet in the growing season.

"One out of four children–roughly 146 million–in developing countries is underweight."

In order to increase global food supplies, smallholder farmers need secure access to land and water; rural financial services to pay for seed, tools and fertilizer; roads and transportation to get their products to market; technology to receive and share the latest market information on prices; and greater representation in decision-making processes. Cooperatives help fill the void, enabling farmers to overcome these constraints by providing members with access to a range of assets and services.

It’s through agricultural finance tools that organizations like Opportunity are implementing systems that help vulnerable small-scale farmers have greater food security. In Sub-Saharan Africa, these tools enable them to grow more crops, increase their incomes and feed their families with:

"To feed the Earth’s growing population, food production will have to DOUBLE by 2050."

This is what Opportunity does in its work with smallholder farmers in remote, rural and agricultural communities in five Sub-Saharan African countries. Our Trust Group model is essential for farmers who may lack access to market linkages, and may have never before had access to formal financial services. We’re able to reach them via mobile banking vehicles and e-banking products, as well as through our loan officers and field staff who train them on best farming practices and in financial literacy. In addition, farmers receive support from their fellow Trust Group members and they have a forum in which to discuss their challenges, voice their concerns, and have a role in decision-making processes.

"Sixty percent of the 10.9 million children under age five who die in developing countries every year, die from malnutrition and hunger-related diseases."

“It has been said repeatedly that we have the means to eliminate hunger and malnutrition,” da Silva notes. “What is needed is the establishment of an enabling environment that allows small producers to take full advantage of available opportunities. Strong cooperatives and producer organizations are an essential part of that enabling environment.”

That environment is what Opportunity creates for smallholder farmers.

Looking for a new way to help Africa’s smallholder farmers? Buy our t-shirt, made by our partner Made for Good. Your purchase will help a farmer grow more food to feed her hungry family, her community and her country!

Previous Article
Blog Action Day: Beduith from Colombia and “The Power of We”
Back to Blog
Next Article
Poverty Eradication Day: Education for a Better Future