I was just in a market a few weeks ago when my husband, children and I went home to visit our families in the Philippines. We were admiring and appreciating the many beautiful handicrafts the Filipinos create so well. My daughters and I went from stall to stall and we could not decide which trinkets and artisan creations to buy as souvenirs–they all looked so beautiful! There were more than 100 stalls selling different kinds of merchandise, and now there are hundreds of thousands of families around the country whose livelihoods are under water.

While the girls were browsing at one of the stores, the owner and I started talking about her business. She has several families who do arts and crafts that make up some of her inventory and then she pays them after they are sold. These artisans are mostly families who earn a meager living by creating and selling their hand-made products. Now, as I see the photos, I can’t help but feel deeply for these entrepreneurs–the vendors, artisans, and their families–who must now start from the bottom to recover from this calamity. 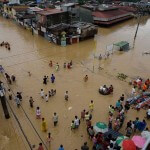 The floods caused by nonstop monsoon rains and Typhoon Haikui have killed 92 and sent half a million individuals to evacuation centers, affecting more than 3.4 million people (according to National Disaster Risk Reduction and Management Council) across 30 cities in 16 provinces. As Virginia “Jeng” Juan, president and CEO of Opportunity’s Philippines institution, APPEND, reported on August 11:

"The massive flooding in the Philippines from August 6-9, brought about by torrential rains and overflowing of some dams caused great damage to our clients, and our partners’ branch staff and offices.

[…]many of the branch offices and houses of staff and clients have no electricity and are still submerged in floods, especially in Pampanga, Bataan, Tarlac, Pangasinan, Bulacan, Rizal provinces and some areas in metro Manila.

Many of the staff are still in their flooded houses and could not report to the office because the roads going to the branch and head offices are still closed due to floods.

Our people would need help such as foods, blankets and some cash to buy food, stoves and medicines. Initially, the partners are asking from their own staff donations for the affected clients.

There were 95,107 clients and Opportunity staff that were greatly affected by floods (i.e. either houses were submerged, washed out)."

We covet your prayers for the people impacted by this calamity. 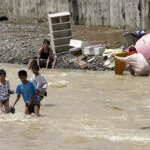 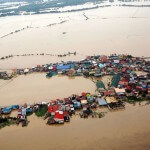 On Monday, August 20, William Martirez, Philippines country manager for our microinsurance subsidiary MicroEnsure, sent us an update following Typhoon Helen (a typhoon that hit northern Philippines last week following Typhoon Haikui) and the monsoon rains in her aftermath. MicroEnsure has pre-approved around 3,000 calamity insurance claims to cover the cost of floods for clients at four of our MFIs in Luzon, Philippines. The claims total 30 million Philippine pesos (about $70,000). Martirez said, “We expect the number to go up as soon as the teams we have sent to the affected areas finish their assessment, and we expect other claims from the other islands.” We’ll continue to keep you posted on the welfare of our clients and staff in the Philippines.

Previous Article
Meet Our Staff: Join the Online Conversation with Our Team
Back to Blog
Next Article
Understanding the Needs of Farmers in Kyenjojo, Uganda