The Passing of Ross Clemenger, a Pioneer of Opportunity Colombia

We were saddened to learn that one of Opportunity International’s earliest supporters, Ross Clemenger, died unexpectedly on Sunday morning at the age of 88. More than forty years ago, Ross helped Opportunity make its first loan to client Carlos Moreno in Colombia, and the Canadian native was the first executive director and the founder of AGAPE, our microfinance partner in Colombia. Ross’s commitment to eradicating poverty in that country has continued with his efforts to help us secure a bank license, which came through just last month. We send our condolences to his wife, Ruth, and his children–James, Ann Marie, Nora and Laurel–as well as to his extended family and circle of friends. Below, please read a reflection from Jim Frantz, chief transformation officer, Opportunity Colombia, who worked closely with Ross: 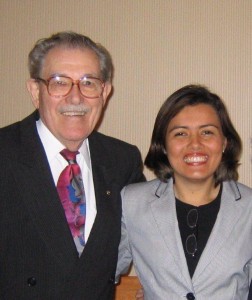 Ross was such an amazing visionary, inspiration, and I had the privilege to call him my friend and advisor. So many times I called him when I was facing a difficult situation or just needed some advice. He was always willing to talk, and in so doing, gave me pragmatic and solid guidance. He called them as he saw them. He rejoiced with us in our victories and humbly and in good humor accepted our challenges and defeats. He was so wise and so full of life stories, with a humble yet certain faith and a crystal clear vision.

One of my favorite quotes from him was when he was speaking to Opportunity’s Latin American board members last year. Someone asked him if Opportunity International, with all of its growth, was what he hoped it would be. He told the group that when he started working with Opportunity, he felt he was cutting a path through a field with a machete. As he cut away he was afraid it would be too narrow and not able to help enough people or that it would become too broad and lose its transformational impact. At that time, he stated that what he saw emerging was a broad highway with a bright line painted down the middle. It was able to serve many, but always had that white line in the middle defining its transformational vision of reflecting God’s love and seeking His impact in their lives. Our biggest tribute and way of thanking our beloved Ross is to maintain that highway in good condition, always adding lanes, but ensuring that that bright line shines in the middle of the road. 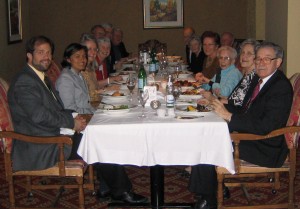 Ross and family, thank you for your years of commitment, your support and your sacrifice for our beloved Colombia. We don’t know how long God will give us to serve this organization, but may we fight to honor the vision of our God and the men and women who founded this organization for His glory. Ross, you are so loved and will be so missed on this earth. “Well done my good and faithful servant.”