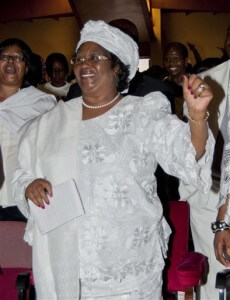 Last week, on Thursday, April 5, Malawi’s President Bingu wa Mutharika died of cardiac arrest, and his vice president, Joyce Banda, was sworn in on Saturday as the new president of Malawi. President Mutharika’s funeral will take place on April 23, and the country is observing a 10-day period of mourning for the departed leader. Upon her inauguration, Banda became Malawi’s first female head of state and Africa’s second female head of state after Liberia’s President Ellen Johnson Sirleaf. President Banda, who took the oath of office according to the country’s constitution in a ceremony in the capital city of Lilongwe, has long advocated for women’s rights in her country, drawing the connection among education, money and empowerment through her work with Malawi’s National Association of Business Women, the Young Women’s Leaders Network and her own foundation.

At Opportunity International, we’re so relieved to share the news that thus far Malawi’s transition to its new president has been a peaceful one. We pray that Ms. Banda’s presidency will have positive consequences for Malawians, 75% of whom earn less than $1 a day, and whose lives have been affected over the last year by severe shortages of sugar, fuel and other commodities.

Please keep Malawians in your thoughts and prayers in the coming weeks and months, that they continue to make this transition as smoothly as possible.