Last February, 29 super-dedicated young professionals and entrepreneurs went to Orlando, Florida to jump out of a plane, skydiving to raise funds and awareness for Opportunity Tanzania‘s microfinance initiatives. Inspired by our supporters’ fundraiser at 18,000 feet, we entered Jump for Opportunity as the “Most Creative Fundraiser by a Charity” in this year’s Classy Awards. If you like our fundraiser, you can vote for Jump in the Classy Awards by clicking here. Of course, we’re not the only organization doing cool fundraisers and creating buzz around our work. Check out these five creative fundraisers that we love by other international nonprofits. We hope they’ll spark your own fundraising ideas. Tell us your favorite or share a creative fundraiser we may have missed in the comment field below… 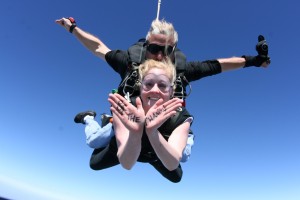 1. United Wii Stand
Students at St. George’s University in Grenada organized a campus-wide Wii tournament to raise money for Doctors Without Borders‘ relief efforts for the 2010 floods in Pakistan.
2. 52 New Things
One individual vowed to do one new thing per week for all of 2010. The activities ranged from eating the spiciest curry possible, to writing a book, to walking an alpaca, to getting a tattoo–all to benefit The Alzheimer’s Society.
3. Slum Survivor Team
One of several fundraisers promoted by Soul Action, a group of high school-age students received pledges to spend three days and two nights in a slum built entirely from local trash. They existed on a reduced diet and with limited access to running water, in solidarity with the more than 1 billion people who live in extreme poverty.
4. Trek China
In September 2010, 20 supporters, including some who had been diagnosed with Parkinson’s Disease, did an 80K trek on the Great Wall of China to raise money for the organization Parkinson’s UK.
5. “Twea Party”
Utilizing social media to the fullest, the Marie Curie Cancer Care organization staged this tea party on Twitter, enabling users to tweet to join in the online conversation and donate.
Share your responses to our list below and let us know if we missed a great fundraiser idea.

This post was written by Jacqueline Ryan, an intern in Opportunity’s Outreach & New Initiatives department. Jacqueline is an undergraduate student majoring in international studies at the University of Chicago.