Murphy was a beloved figurehead, always bringing light and laughter to the room. He was first introduced to Opportunity in the early 1980s by his Board Member Em Griffin. Murphy became a donor and then began fundraising for the organization, then known as the Institute for International Development Inc (IIDI). He helped move the modest offices—which consisted of three boxes and a fax machine—from Washington D.C. to Chicago. Murphy quipped that at that time, “We were making 12 loans…so really only needed one computer.”

During his time at Opportunity, Murphy built up a powerful board and hired several key staff members who are still supporters today—fortifying a nascent organization to prepare for a period of immense growth.

Mark Lutz, Senior Vice President of Global Philanthropy, was hired by Murphy in 1989 and developed a lifelong friendship with him.

“Gordon created a culture of respect, honesty, and humility that has remained part of our DNA. He sought to follow Jesus‘ teachings and example regardless of who he was interacting with,” Lutz said. “Always taking sides with the marginalized and oppressed, he left the world a more just and loving place.”

Murphy stayed an active supporter of the organization for the next three decades, and most recently sat down with CEO Atul Tandon on February 21, 2021, for a fireside chat to reflect on Murphy’s time at the helm of the organization. You can hear Murphy’s reflections from that conversation here.

Always quick to credit others and lift up those around him, Murphy’s faith always prevailed as the leading driver for his benevolence, gratitude, and courage.

“Gordon was a beloved member of the Opportunity family,” said Tandon. “Today we stand on the shoulders of giants like Gordon, someone who forever changed the trajectory of our organization. Because of his strategic decisions at a critical junction in Opportunity’s history, we are able to serve millions of people living in poverty today—this will be his legacy to Opportunity.”

He will be dearly missed. Opportunity asks that you please keep the Murphy family in your prayers. 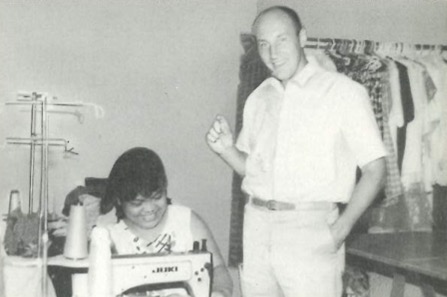 Gordon Murphy in the Philippines visiting a client.