Dive into a classic with us! Cutting for Stone by Abraham Varghese 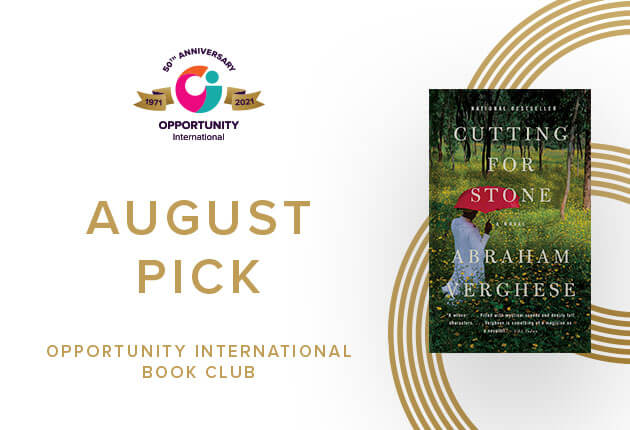 Back-to-school season might be right around the corner, but there is still time to squeeze in a few more summer reads with the Opportunity International Book Club!

Join us as we read an engrossing epic about twin brothers coming of age on the brink of revolution in Ethiopia.

This month, we’re reading the national bestseller Cutting for Stone by Abraham Varghese.

Beginning in Addis Ababa, Ethiopia, in 1954, Cutting for Stone follows Marion and Shiva Stone, twin sons of an Indian nun and a British surgeon. Orphaned by their mother’s death and their father’s disappearance, the boys must make their own way in the world. This family saga takes readers from Ethiopia to New York City and back again in an unforgettable story of love, betrayal, exile, and redemption.

With over one million copies sold, Cutting for Stone is an absolute classic, bringing in accolades as a New York Times Bestseller and a 2009 Amazon Book of the Year. The Seattle Times described it as “absorbing and exhilarating,” and The San Francisco Chronicle called it “a masterpiece.”

What do you say—are you in?

We can’t wait to read with you!

Previous Article
Inspiration from the Olympic Games
Back to Blog
Next Article
50 for 50: History of Education Progress