Kicking off this second Friday plenary session of the morning, Steven Levy, Senior Writer for Wired magazine, and author of In The Plex: How Google Thinks, Works, and Shapes Our Lives, talks about technology and how innovative thinking in the technological sector can truly offer solutions to the biggest global issues. 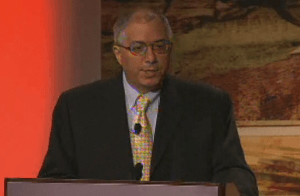 A few years ago I wrote a story about computer hackers and expected a disheveled group of people. But what I found was a group of people committed to changing the world through technology. The experience really changed and galvanized me.

One thing that hackers believed is that information should be free. No one owned it, it belonged to the community. The people who designed the internet also built the internet based on the free flow of information. The lessons we have from the hackers is do the impossible and share the information as much as possible.

Now I want to talk about Google. Sci-fi writer Arthur C. Clarke said, “Any sufficiently advanced technology is indistinguishable from magic.” When I went to visit Google headquarters in 1999, I felt Google was a little magical. Larry Page and Sergey Brin built the world wide web and Google at Stanford, and changed the way we search.

When I wrote In the Plex, I really saw how technology has the power to change the world. I was traveling to India with Google employees tasked with creating Gmail. We saw that the villagers had access to mobile phones and they had four bars, great reception, I don’t even have four bars in Times Square! And now Google has embarked on creating mobile phones. So the thing I learned from Google is take on big, hairy, audacious goals.

Finally, I want to talk about Steve Jobs, who I was lucky enough to interview. I want to read something he said to me in an interview years ago [Steven reads from his iPad]:

"Fruit. An Apple is the ultimate simplicity… When you get into a problem and find all these complexities, that’s where most people give up. The truly great person will keep going and come full circle to find solutions to the problem."

Twenty years later when I read that quote back to Steven he said yes, that’s what Apple still does. Technology truly solves problems and changes lives. Thank you.

A bit about Steven Levy

Steven Levy is a senior writer for Wired, the former chief technology correspondent for Newsweek and the author of seven books. Washington Post describes him as “American’s premier technology journalist … a Silicon Valley insider who writes for the rest of us on the outside.” His most recent book, In The Plex: How Google Thinks, Works, and Shapes Our Lives, has been a New York Times bestseller and is heralded as the definitive word on the search giant. His first book, Hackers: Heroes of the Computer Revolution, was named by the readers of PC Magazine as the best sci-tech book of 20 years and was recently updated for a 25th anniversary edition. A longtime expert on Apple, Levy has written the history of the Macintosh, Insanely Great, and The Perfect Thing, about the iPod. Other books include Crypto, Artificial Life, and The Unicorn’s Secret.