This Saturday morning plenary session continues with a presentation by Jeffrey Spector, Chief of Staff for the Bill and Melinda Gates Foundation. 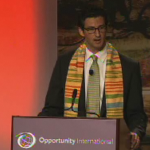 "Innovations are not only happening in labs or on computers. I’ll give two examples:

A few years ago, I was tasked with scaling up Gates’s organizations. We made an assumption: informal services are harmful to people in poverty. But in fact, people in poverty lead fantastically complicated financial lives. They value these services. For instance, ROSCAs, or informal savings groups, are the precursors to microfinance. They encourage self-discipline, their group structure encourages repayment on time, and they require no collateral.

Fast forward to several years later, when I was headed to Uttar Pradesh, an Indian state that has one of the highest infant mortality rates in the world, and astounding levels of poverty and suffering. I was there to help improve the health and childcare of newborns. I brought my father, an obstetrician, with me for both clinical advice and support. The doctor at the local clinic observed unhygienic conditions during childbirth that was having detrimental effects on the health of children. But the local clinician realized he needed to work within the existing framework–as he said, “Their cup is not empty.”

People in poverty have access to unexpected resources and social networks. These social networks can be the difference between life and death. People in poverty are not resistant to change. They seek out technologies that make their lives better, like mobile phones. There’s a reason thatt Africa is one of the leading markets for mobile phones. We need to approach the problems actually facing the poor and not just take on the easiest or quickest problems.

The first microfinance practitioners did not invent a financial solution to poverty, they merely employed existing solutions already used by the poor. They saw the ROSCAs and said, “We can build a better mousetrap.”

A bit about Jeffrey Spector

Jeffrey Spector serves as chief of staff to Melinda Gates at the Bill & Melinda Gates Foundation. He provides strategic and analytical support to Melinda and program teams on the full range of the Foundation’s work, which cuts across health, education, and poverty issues domestically and around the world. Jeffrey joined the foundation as a program analyst on the Financial Services for the Poor team. Earlier in his career, he helped to start Linktone (NDAQ: LTON), a Shanghai-based mobile services provider, overseeing the company’s international business development and later market research efforts. Jeffrey also served as a consultant to the U.S. government, conducting research and analysis for the HELP Commission which reviews all U.S. foreign assistance to improve its efficiency and effectiveness.