As we celebrate Opportunity’s 50th Anniversary, we are looking back at our history and remembering the clients who have inspired us along the way. One of the earliest recipients of an Opportunity International loan was Tito Santa María, a beekeeper in Colombia. We are honored to share his story.

I’ve always said that the bees do a perfect job—all of the mistakes are ours.

My name is Mr. Tito Santa María, and I’m a beekeeper. Thirty years ago, I took out a loan to run my own business from the organization that became Opportunity International. My journey as a business owner has been full of mistakes and triumphs, obstacles, and answered prayers. Along the way I received advice, loans, and invaluable support from sponsors as I developed my beekeeping business, Abejas y Miel—Bees and Honey—which is still thriving today.

A Childhood in the Countryside

I was born in the countryside of Colombia in a village called El Laurel. My father was a farmer who herded mules. In 1957, he moved our family—my three siblings, my mother, and me—to Bucaramanga. I was 7 years old. He wanted to provide us with a better future, one that included an education. There was not much hope in the countryside, a very arid region where there was a lot of violence.

My family attended a small church in Burcaramanga run by missionaries. When I was 15, I met one of them named Mr. Ross Clemenger, and we instantly became friends. We stayed in touch after Mr. Ross left Colombia and returned to the United States to continue his work.

Three years later, I went to live in Villavicencio where I worked as an elementary school teacher. There, another missionary named Mr. Mark Stringer introduced me to beekeeping. He gave me two queens that he had brought from the United States. When I wasn’t teaching classes, I took care of my first two hives, multiplying them into 20 hives. I loved working with bees, but I simply wasn’t making a living. Between the teaching and beekeeping, I was earning only enough to eat.

I decided to sell the hives, and with that money return to Bucaramanga, carrying only my luggage and two hive beginnings, called “nuclei.” I installed them on the roof of my father's house and soon multiplied them into 20 hives again, but I knew they would not give me enough income to live. I found work in the marketplace buying and reselling potatoes, using a stand that was owned by my uncle.

One morning I was walking out of church with a woman named Myriam and a few of her friends. A flower vendor passed by us, so I bought a few flowers and gave one to her. That’s how our friendship began. We became a couple and were married shortly after, in March 1974.

The person who married us knew Mr. Ross, who was by then working as a loan officer for IIDI (later renamed Opportunity), and both of them knew about my love for bees. Through IIDI, they found me a sponsor, someone in North America who would invest both money and time in my enterprise.

I’ll never forget the day that Mr. Ross called to tell me about the loan. I was working in my uncle’s market stand, which had the only phone in the whole market. I picked it up on the first ring. The call was for me. On the other end of the line, Mr. Ross asked me, “Do you want to work with bees in Sincelejo?”

And right away, I replied, “I am ready, Mr. Ross. We are moving there.”

Later that day, I told my wife about the phone call in the market stand. All she said was, “Let’s go.”

My family had a saying: "If anyone wants to leave the house, we help them pack their suitcase." They didn’t make any objections to our new direction. They helped us pack and wished us well.

A Crisis in a New City

We sold most of our belongings and arrived at Sincelejo with two cardboard boxes filled with kitchen utensils and one suitcase filled with clothes. We had nothing, but we were so happy because I could finally dedicate myself fully to beekeeping. Myriam and I knew that the choice to accept a loan was a tremendous opportunity, but not an uncomplicated one. We could invest our credit in what we really needed. On one side, the Bible says, owe nothing to anyone. But in today’s world, if there is no money, no credit, no cash flow, you can’t start a business or start a project. Money is very important. It's very clear that we have to repay our loans and to save so we don't have to ask for more money. This was always my goal—to use the loans well and to become self-sustaining.

My company was established with an investment from me of $10,000 pesos and $40,000 from my sponsor, Mr. Haull. With these funds, I set up 100 hives. With a second loan, also for about $40,000, I expanded my business and bought a used truck. On the recommendation of others, I set up the hives in an area I wasn’t familiar with. It was beautiful, covered in flowers and other plants, and it seemed perfect for the bees. But none of us knew that the place where I installed the hives was close to a cheese factory.

The workers at the factory disposed of a sweet serum, refuse from the cheese-making process, into an open field that was far away from my hives, but still within range of my bees. Bees travel miles to pollenate flowers. My bees came into contact with the waste and infected most of the hives. Almost all the bees died. Myriam and I were devasted. We were far from our home, with most of our new business destroyed. We only had 13 out of 100 nuclei left, which I transferred before they also became infected. Myriam and I started living on two monthly loans: $300 from my father and another $300 from Myriam's mother.

Mr. Ross supported me throughout the crisis, telling me that all businesses have an adjustment period. He believed in our ability to steward our business well through difficult times and through good ones. His help was fundamental, like that of a good father with his son: good advice, patience, a good example, inspiration, and always a helping hand. He visited us every year and told us that he liked coming to our house because he always found that we had made small improvement.

After the financial setback due to the cheese factory, I took on another job selling milk, in addition to working with my remaining hives. This work was sunup to sundown, but I counted everything as an opportunity, even the grueling hours. I’ve always said, that when I left Burcaramanga I came to “a land filled with milk and honey.” That came true in surprising ways!

I took out another loan from IIDI to cover the costs of new hives and new equipment for our enterprise. Myriam and I continued to establish our business, already accompanied by our first-born son, Eric, who was born in 1975. Three years later, we had Edgar, and after another three years we were blessed with our daughter, Ruth.

I relied on the help I received from the community around me in Sincelejo, even when we did not see eye to eye. My determination was backed by Mr. Ross’s confidence in me. Once, I refused a loan that Mr. Ross recommended I take to expand the business, but I felt it wasn’t a wise move at the time and turned it down. Impressed, Mr. Ross accepted the refusal and continued supporting me, acknowledging that I knew what was best for my own business. Other than during the cheese factory disaster, I have never missed a loan payment.

Mr. Ross gave me good advice: “Be honest, invest in the right thing, be diligent not lazy, keep doing things.” 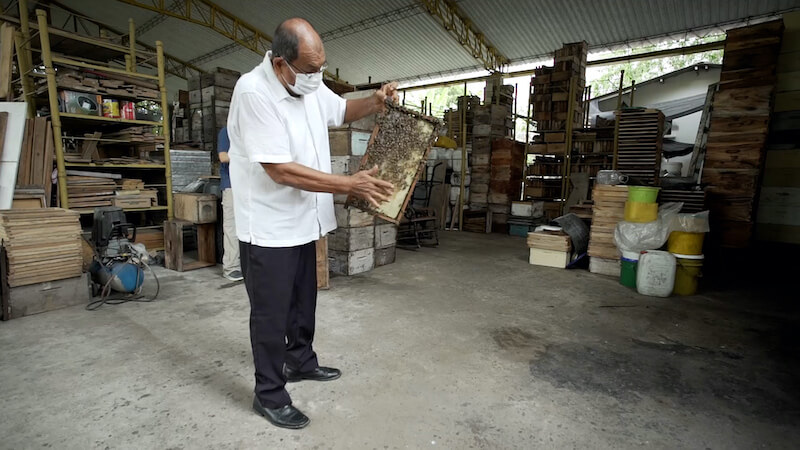 The Future of Abejas y Miel

Today, we still take that to heart. Abejas y Miel is a company created for the promotion of apiculture (beekeeping), and we are dedicated to the collection and commercialization of honey from bees. In the past I have had up to 20 workers on payroll. The company has now been passed on to the second generation with my daughter, Ruth Santa María, acting as the manager. A few years earlier, Ruth and her husband had moved back to Sincelejo to help me when I was sick and unable to operate the business on my own. They made improvements on my original plan and have since taken over most of the day-to-day operations of the apiary and the business.

Eric, the oldest of our children, has been delegated by the Colombian agriculture ministry to teach beekeeping throughout the country, and also works as a high school teacher. Edgar, our second child, is an electrical engineer with a degree from the University of Santander, who develops products related to the beekeeping business, like smokers, centrifuges, superculators, and storage tanks.

My daughter and son-in-law often tell me to stay behind instead of going out into the fields to check the hives, due to several injuries I sustained in the field. However, I still think about improvements for the Colombian beekeeping industry. We need more accessibility to transportation equipment, like cranes and trucks, that would allow beekeepers to move their hives. It’s important that beekeepers are continually on the move, in search of new countryside that is most conducive for effective pollination and the formation of honey—not unlike farmers rotating their crops.

Today I sell my honey all over Colombia, to five-star hotels and other clients in Medellin, Barranquilla, Cartagena, and Burcaramanga, where I grew up. I hope to be a permanent figure in Sincelejo. My business is on track to keep growing and developing over the next 20 years and to outlast me. I’m also the president of a bee association that supports poor businessmen trying to get started in beekeeping.

Even though the circumstances I came from were limiting, I never counted myself out of the possibility of prospering and doing well in business. Abejas y Miel is the result of this hope and hard work. I believe that the best thing man has is that he can develop himself.

When a young person shows an interest in beekeeping, I always encourage them. I tell them that those insects know how to do their job very well. As my father told me, “It’s better to herd your mules than carry the load yourself.” So if I can give the bees a place that is adequate for them, and see that they have no enemies, like ants; if I’m diligent and do not allow other insects to attack them, they will compensate me with a good harvest. I don’t have to teach them anything.

Each week for the next 50 weeks, we will share a piece of Opportunity's history—major or minor, sobering or inspiring. We have gotten to where we are today by facing some of the world's greatest challenges, with you by our side. Please join us in celebrating the many significant moments that have built the foundation on which we will embark on our most audacious vision yet: ending extreme poverty.