Opportunity's Senior Vice President of Global Philanthropy, Mark Lutz, traveled to India to meet some of our incredible clients. Over the course of two weeks, he is sharing a few of the stories of the powerful moments he experienced and inspiring people he met. Read Part 1 here, Part 2 here, Part 3 here, and Part 4 here.

It had been almost 10 years since my last visit to India, and several notable changes struck me. The cities seemed more orderly. Expressways connected major cities to airports. Beggars and street hawkers were less prevalent and persistent. Ubiquitous cranes constructed high rises. Everything looked cleaner. However, pollution at times darkened the sky.

One clear indicator of prosperity was the replacement of bicycles by motorcycles. The opening scene of my book, UnPoverty, described my ride in India on a bicycle rickshaw, and my observation of thousands of bikes like his. On this trip, I saw almost none. I remember a collage of photographs of bicycles I took back then, and I contrasted it with some I took this time of motorcycles. I took this 20-second video while I waited on the corner. 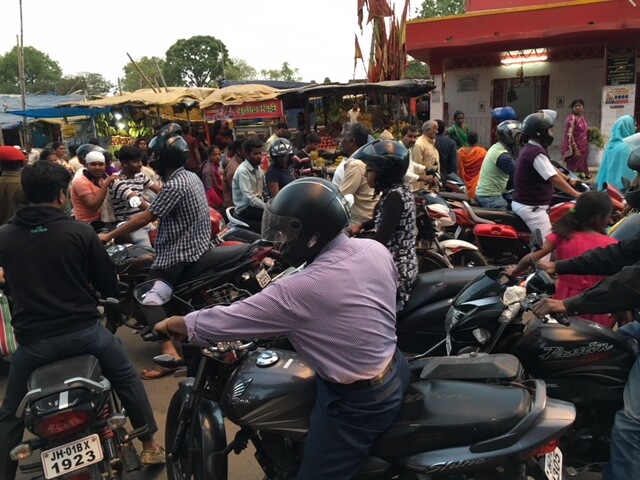 Despite the economic progress, India is still home to half the people in the world who survive on less than $2 per day. Those are the people I came to meet. I came to record their progress because thankfully, many of them are fighting their way out of extreme poverty.

I met a group of 9 women, some of whom were now on their 4th consecutive loan, each fueling a micro-enterprise. But what made this group unique is that 6 of the members also carried full-time jobs in a nearby chemical factory.

Six days a week they worked an 8-hour shift, for which they were paid 6,000 Rupees per month – about $100, or fifty cents per hour. Several of them mentioned that their husbands also had jobs in the neighboring factory, relying on parents and siblings to care for their children. Most of the women engaged in retail, selling vegetables or other food. A couple of them were tailors. All ran their enterprises in the evening after the day at the plant.

Whether it’s pollution from motorized vehicles or long work days at a factory, progress comes with a price. When I asked these women to list benefits they had seen from their enterprises, their responses were typical: education for their children, support from their husbands, solidarity with their group. One mentioned a son now in 10th grade (who owns his own mobile phone).

But the benefit one woman mention that caused more reflection was, “Peace of mind.” She elaborated, “Not only can we meet our current requirements, now I can look forward.” Though she didn’t use the word, what she was describing was hope. Hope that the future would no longer mirror the past – particularly for her children.

May you find much joy in knowing that your involvement offers others hope.

Previous Article
Field Update: My Trip to India, Part 3
Back to Blog
Next Article
On the Ground in Rwanda: Experiencing the ‘Extra’ in the Ordinary