Announcing our April Book Club Selection: We Wish to Inform You That Tomorrow We Will Be Killed with Our Families

Join us for the Opportunity Book Club and read with us! Each month, we will select a book about a country in which Opportunity works, an issue that is relevant to our clients, or a topic of interest. Read with us, join our discussions online, and broaden your perspective of the world.

On April 7, 1994, an unimaginable genocide began in Rwanda. Over the course of 100 days, neighbors fought against neighbors and Rwandans brutally murdered their fellow citizens, leaving nearly one million people dead. It is a horrific and critically important piece of our global history and an event that impacted many of our current Opportunity International clients in East Africa.

This April, in honor of the 24 anniversary of the Rwandan genocide, we are reading:

A #1 Bestseller, We Wish To Inform You shares "an unforgettable firsthand account of a people's response to genocide and what it tells us about humanity." 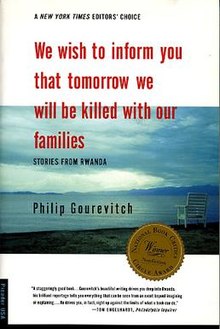 Written by acclaimed author and journalist, Philip Gourevitch, the book recounts the horrific history of a beautiful country. Gourevitch, a regular contributor to The New Yorker magazine and former editor of The Paris Review, began reporting from Rwanda in 1995, and after years spent researching, interviewing, and writing from East Africa, was described by The Observer as "the world's leading writer on Rwanda."

It has been described as "shocking and important," "brilliant," "staggeringly good," "astonishing," "the most important book I have read in many years," and more by critics and readers.

Gourevitch's narrative reminds us of the importance of treating all people with dignity and respect. It shines a light on a terrible moment in human history when neighbors killed neighbors, people questioned the humanity of their fellow citizens, and an entire country nearly collapsed in the hunt for power and control. After the genocide, many voices cried, "Never again." By reading this book this month, on the anniversary of the genocide, we hope to renew this call for ourselves.

Pick up a copy on Amazon.com, at your local library, or at your favorite local bookstore today.

Learn more about the Opportunity Book Club at opportunity.org/bookclub

Fill out my online form.

Previous Article
My First Time in the Field
Back to Blog
Next Article
Field Update: My Trip to Ghana