"On the third day of Christmas, my true love gave to me three French hens ..." 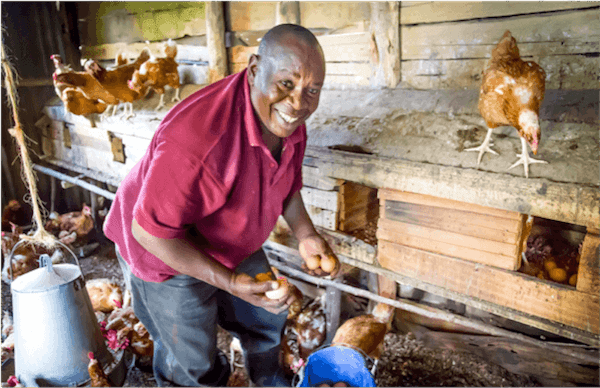 Around the world, approximately 80% of farms are smallholder farms, constituted of about five acres of less, with many located in rural, marginalized communities. However, two-thirds of smallholder farmers in Africa are poor and malnourished. Without the ability to invest in quality seed and fertilizer, these farmers struggle to achieve, on average, only 40% of their harvest potential, resulting in poor incomes for the farmers and food scarcity for their communities.

With the growing food demand in Africa expected to increase three-fold within three decades, Opportunity International is investing in the untapped potential of smallholder farmers like Samuel Gatawgi (above), empowering them with technical assistance and financial services to increase crop yields and quality, boost incomes and improve food security for their communities.

Investing in Farmers to Transform Communities

Samuel Gatawgi, father of five, first began his farm after he and many others were laid off by the major creamery cooperative in Kenya. Like many of his coworkers, Samuel had to start a business from scratch to ensure he could provide for his family and send his children to school.

Starting with little income and technical knowledge, Samuel struggled to make the business profitable. Then, after his shop was broken into severely damaged, Samuel knew he needed a loan to rebuild and improve his business. Fortunately, a former co-worker told Samuel about Opportunity. After joining a Trust Group, he received technical training and secured a loan to purchase a small bull, which he was later able to sell for three times the profit. Now, seven loan cycles later, Samuel has grown his business to include free range chickens and cattle, hired two employees and has been able to send all five of his children to university. In addition to increasing his income, Samuel’s sustainable agricultural business also provides a reliable source of affordable and nutritious food for his neighbors.

Feeding Communities, One Small Farmer at a Time

As a continent, Africa contains 25% of the world's arable land, yet produces only 10% of its food. By providing financial resources and training, Opportunity is helping farmers tap into the full potential of their land, which is producing higher yields, healthier livestock and reliable food sources for themselves and their communities.