"On the second day of Christmas, my true love gave to me ... Two turle doves." 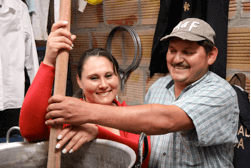 I want to introduce you to an amazing couple. They have been through so much together, and yet their love, positivity and determination remain unwavering. They are my version of turtle doves — together for life, a symbol of love and peace.

Martha and her husband are originally from Huila, a province in the southern part of Colombia. They lived on a farm where they were raising their young son. Huila is one of the areas marred by fighting between the illegal armed groups and the army. The family lived in constant fear that the guerillas would forcibly draft their son to carry their guns, as has happened with too many boys. One day, one of the guerrillas came down from the mountain and told them that they were accused of aiding the army. They were given 12 hours to leave their home or be killed. They fled to Bogota with little more than the clothes on their backs.

In Bogota they begged for food and got jobs where they could. They squatted in a shanty in Usme on the outskirts of Bogota. Finally, Martha qualified for a government training program and became a security guard. One of Martha’s coworkers told her about Opportunity Colombia’s Trust Group loan program. The couple knew this could help their family gain some economic security. Martha contacted Opportunity, but was told there were no groups in her neighborhood. If she wanted a loan, she would have to form a group of 15 people in her neighborhood. Though Martha barely knew her neighbors, she bravely knocked on every door until she finally had enough people to form a group. Today, Martha is the president of the Fig Tree Trust Group.

Using her first loan, Martha and her husband started a small enterprise to supplement their meager salaries. They made and sold his unique family recipe for a traditional rural drink made of corn and milk. At first, they sold about 40 drinks a day for about $1. After two years of loans, Martha and her husband now sell about 450 drinks per day. They require so much milk that the milk company sends the truck to their home to deliver each week. Today they have a solid brick house, an industrial stove and have even purchased a used car. They have presented to a local grocery chain that is interested in distributing their drink. During all of this time, Opportunity International has been the only source of financing and training for their business endeavor, and the loving couple is deeply grateful. Together, they dream of increasing production and purchasing a fleet of motorcycles to distribute their product throughout Bogota. They know that no matter what, their son now has a future. They also dream that one day, there will be peace in Colombia and they can safely return to their home village.

The dove has been a symbol of peace across nations and generations. We join this couple’s prayer for peace in their country and around the world this Christmas. We pray for all the displaced families, and that they find hope and love as they await peace.

Previous Article
Feeding the Flock: Empowering Smallholder Farmers to Improve Food Security
Back to Blog
Next Article
One Amazing Gift – A Job