Trent was an Intern with Opportunity International in the Summer of 2013.

The average chief executive officer’s (CEO) responsibilities include building relationships, managing and planning. Most CEOs earn their prominent positions through experience, hard work and intelligence. These same core strengths and values comprise the foundation of a mother’s work. It’s ironic because women, despite their principal familial roles, remain one of the most subjugated social groups worldwide. The idea of a women’s movement is nonexistent in many parts of the world, due to antiquated gender relations and religious practices, as well as economic and political oppression.

More needs to be done to ensure that every mother has the necessary resources at their disposal, just as a chief executive would have. Opportunity International helps give women a working chance.

Mothers manage their children, siblings and spouses much like CEOs manage their fellow executives, board members and employees. Moms, like CEOs, must balance the emotions, controversies and experiences of not just others, but themselves too, providing solutions to problems plaguing their families.

The management aspect of motherhood might be the most overlooked because mothers provide support for their circles through good times and bad, often providing reassurance and instilling confidence to carry on. Moms, through their experiences, judiciously allocate resources to their networks, no doubt giving far more than they receive. 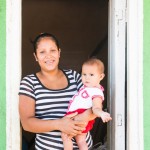 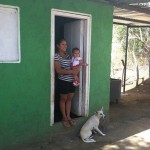 Aleyda Luque, of Masaya, Nicaragua, lived for four years in a shelter that had four walls but no roof. When she became pregnant with her first daughter, Brittany, she knew this had to change. She worked with Opportunity International and 16 other families in her village to get a loan that allowed them to put roofs on their homes.

“It has been especially wonderful during the rainy seasons,” Aleyda said. “Children no longer get as sick since we have a warm, dry home protected from the elements.”

Mothers and CEOs have tremendous planning skills. Often times, moms and execs benefit from their innate ability to envision their constituents’ futures. Mothers in developing countries can visualize sending their children to school, providing their families with food and shelter, but, unfortunately, there exists an enormous gap between vision and reality.

Imagine the CEO of a major corporation trying to execute a profitable acquisition of a smaller group, but doing so without any capital or stockholder support. This scenario would, no doubt, end in complete failure. Mothers across the world face similarly daunting circumstances when simply trying to send their children to school. Opportunity International, however, helps bridge the gap between vision and execution.

Faluwa Nakayiza, who lives on a farm in Uganda, received her first Opportunity loan in 1998 and used it to buy a cow. Since then, she has taken out 21 loans that enabled her to purchase a small herd of five cows, expand her salon and build a home for her family. She sent all five of her children to good schools with the profits from her businesses.

Opportunity stands committed to helping people develop their capacity in business and in life. That is why we provide customized training at every level—from financial literacy for new clients, to marketing skills for loan officers, to strategy development for executives. These activities help equip mothers with the skills and infrastructure necessary to turn their dreams into reality.

It is time to stand up and take notice that motherhood involves far more than procreation and child-rearing. Rather, a mom’s role shares core similarities with a chief executive officer’s because strategic vision, team management and relationship building exist as cornerstones of both.