Many continue to hope as anti-apartheid icon Nelson Mandela remains in critical condition fighting a recurring lung infection that has left him hospitalized since June 8th. As a widely beloved and respected figure, news of Mandela’s illness has been met with sadness, while also leading people everywhere to reflect on the significant contributions he has made to South Africa and the world. 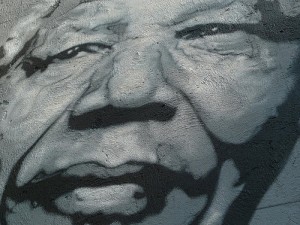 Here at Opportunity International we express our gratitude and recognition of Nelson Mandela as one of the greatest contemporary figureheads of humanitarianism. His ability to create change while advocating amity, humility, and understanding within an unjust atmosphere (including 27 years held as a political prisoner) is truly remarkable. Through peaceful means, he saw the end of apartheid and became South Africa’s first democratically elected president in 1994.

Mandela’s incredible spirit, passion, commitment, and humility situate him among visionaries like Mahatma Gandhi, Martin Luther King Jr., and Mother Teresa. Each of these individuals lead and inspire us and many others as we pursue an end to global poverty. We remember and appreciate their examples as we send our thoughts and prayers to Nelson Mandela, his family, and South Africa.

Whatever the future holds, Mandela’s words and mission will continue to resonate. As we continue to work towards the vision we share with him, of a world of freedom and equality for all, we reflect on this message:

“Overcoming poverty is not a task of charity, it is an act of justice. Like Slavery and Apartheid, poverty is not natural. It is man-made and it can be overcome and eradicated by the actions of human beings. Sometimes it falls on a generation to be great. YOU can be that great generation. Let your greatness blossom.” -Nelson Mandela, 2005 Trafalgar Square, London

Previous Article
What We’re Reading: One Data Report 2013, Part 2
Back to Blog
Next Article
Entrepreneur Natalie Hornsby Believes in the Power of Education