Last year, Young Ambassador for Opportunity Allison Altdoerffer Lived Below the Line for Opportunity International. The following is a guest post by Allison about her experience. Join her take the challenge April 29-May 3, 2013. 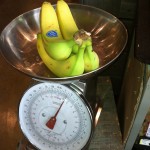 I consider myself to be a very thrifty shopper. I buy in bulk, keep an eye out for special markdowns and cut costs by threading similar ingredients across my weekly menu. So when our local YAO chapter decided to take the Live Below the Line challenge last year, committing to spend less than $1.50 a day on food and drink in honor of the 1.4 billion people living under $1.50 a day every day, I felt pretty certain I’d topple the feat with ease.

I stopped by the grocery store the night prior to pick up the ingredients for my meals. Despite only gathering a few items, my trip was perhaps the longest in recent memory as I tediously scoured the shelves for the best bargain. I began to draw stares after I weighed my tenth or eleventh potato – trying to find the heartiest choice that fit within the budget – and slowly peeling off banana after banana from the bunch until I hit my budget. But, suspicious looks aside, I made it under $1.50.

The next morning, I settled in at my cube and slowly gnawed at my breakfast: one banana. (I usually start my work day with a bowl of granola with soy milk plus several cups of coffee.)

By 11:30, my head was aching for lack of caffeine and I was desperate for my container of plain, white pasta. Although the portions were greater, the bland flavor left me unfulfilled – especially after watching my co-workers enjoy some catered sandwiches and salads.

I ended up working late, and while normally I’d grab a sandwich from the nearby café or a snack from the office break room, they were outside my remaining budget. Once home, I fried up some potatoes and eggs, but without a side of ketchup or seasonings, I was far from satiated.

As I headed to bed, I reflected on the day and was surprised with how quickly I’d changed how I look at food:

Although I managed to meet the challenge, I can’t imagine having to repeat it every day if living below the line was my reality.

Allison Altdoerffer is an Account Executive at Edelman and co-chair of YAO-San Francisco. She blogs about life and career at goturnright.blogspot.com.

Previous Article
3 Ways Opportunity International Will Tackle Poverty in Mozambique This Year
Back to Blog
Next Article
What We’re Reading: Banking in Africa: Continent of Dreams