Edward Opuku put his years of training and education to work to build successful businesses repairing and renting stereo systems, despite the warnings of his friends and neighbors. Believing in himself, and building upon Opportunity International’s resources and training, Edward now has three shops, a warehouse and a team of 10 employees. 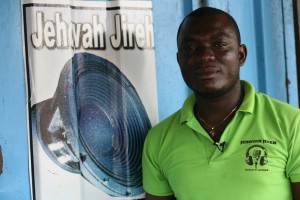 Edward comes from Akyem Oda Ayirebi in the eastern part of Ghana. He moved to Ghana’s capital, Accra, as a child, and currently lives with his wife and two children in the town of Teshie on the outskirts of the city. He grew up the fifth of 10 children. When he was young, his father insisted he learn a trade and enrolled him in a four-year electronics repair apprenticeship course. Edward, however, decided to stay on for eight years so that he could learn everything possible about the trade. 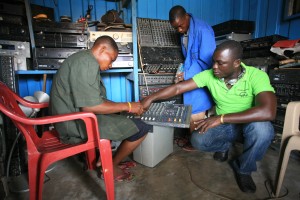 Gaining training and confidence in his skills, Edward decided to open his own electronics repair shop. Edward approached Opportunity Ghana for a loan to start his business. With the loan, he started a shop called Jehovah Jireh Electronic Service Shop to fix audio amplifiers and sound mixers. He did this for one year, then decided to build sound systems for rental, and opened his second business, Jehovah Jireh Quality Sounds.

At first, it was tough. He only had enough capital to purchase four sets of speakers. Now he now has 14 sets, provides sound for large events, and is in such high demand that he must turn customers away during peak business times. 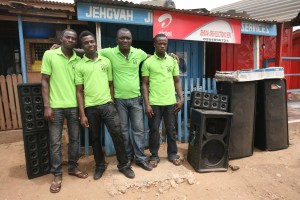 When Edward rented his sound systems, customers often would ask him if he knew of any live music acts that they could hire to sing and play along. So he decided to start a musical group, which he called the Jehovah Jireh Band.

Edward now has three shops, including a small warehouse where he stores repaired equipment for his customers. His repair business is thriving and he has been able to hire a number of employees, whom he trained to do tasks he used to do. 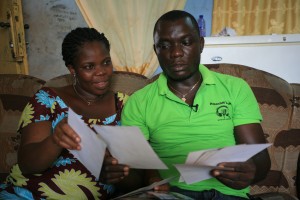 “I’m happy — very happy — because not everybody can open a company and pay 10 employees,” says Edward. “I am happy that my employees take money home, because they have families, wives and children.” After taking out several loans from Opportunity Ghana as a member of a Trust Group, he is now eligible for a larger individual loan.

Looking back over the five years since he started his first business, Edward remembers that in the beginning people told him that others with similar dreams did not succeed. “I would keep telling myself, ‘I can do this. I need to think about succeeding and not be afraid of failure,’” he recalls. His advice to others who want to start their own business is not to be afraid, but to be strong and work hard, because in the beginning it is difficult.

“We did not know all this would come our way,” says Edward. “My wife, my family, my boys, those at the workshop and the band, we are all happy. Today is Christmas Day for us.”

Previous Article
One Woman Transforms her Community in Colombia
Back to Blog
Next Article
The Power of One Client, Felicitus, to Impact the Lives of Many