Ghanaian president John Atta Mills died unexpectedly of a sudden illness on Tuesday at the age of 68. As the Ghanaian people mourn the death of the law professor-turned-leader who they affectionately called “The Prof,” global media is taking note of the smooth transition of the country during this difficult time. The BBC and other news outlets report that the swift and smooth swearing-in of the vice president, John Dramani Mahama, highlights how far Ghana has gone on the road to democracy. It’s a trend that can be felt in many other countries in Africa. “The norm these days across the continent,” says Mark Doyle of the BBC, “is for civilian leaders to be elected to office with various (but increasing) degrees of fairness.” Mills’s family and close friends had a private funeral on Wednesday in Accra, and the country is currently holding a week-long period of mourning. The date of the public funeral has not yet been announced. Ghana will hold its presidential election as scheduled this December. 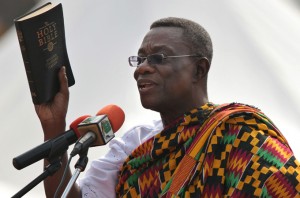 Opportunity Ghana’s CEO, Cosmus J. Kowuoche, remarked on the sad death of President Mills. Kenyan-born Cosmus knows all too well the perils of presidential power struggles, given the riots that followed Kenya’s elections in December 2007 and January 2008. In an email to Opportunity’s international staff, Cosmus writes:

"Yes, this is a sad moment in Ghana and God is merciful. Ghana’s population has taken the shock sorrowfully, prayerfully and peacefully. Politicians have offered mature leadership by swearing in a new president, John Dramani Mahama, on the same day per the constitution, which has eliminated a leadership vacuum or speculation. I have not heard or seen any politics or hostile comments on the radio or in the news media. I admire the Ghanaians and glorify God in all of this. Keep praying for the family and the country that the funeral will proceed peacefully.

Both major political parties (the National Patriotic Party and the National Democratic Congress) embrace microfinance and it is institutionalized within the economic framework of the country. The Ministry of Finance also has a department dedicated to the development of this sector, while the Bank of Ghana has a unit focused on regulating its financial operations. I see no reason to believe that microfinance activity will not continue uninterrupted despite the leadership change.

We appreciate your prayers as the government prepares for the funeral ceremonies. May John Atta Mills’s soul rest in peace. Amen. He was a peaceful president."

Previous Article
Credit Suisse’s Microfinance Work Recognized at the Financial Times/IFC Sustainable Finance Awards
Back to Blog
Next Article
What We’re Pinning: Our Top Picks This Week on Pinterest