A Better Future for the Congo: Developing the Next Generation of Congolese Fathers

The following post by Kadita “A.T.” Tshibaka, member of Opportunity’s Board of Directors, was originally published in The Huffington Post on Friday, June 15. The original post is here.

My greatest challenge as a father has been the moments of terror when my children were gravely ill, and we thought we were going to lose them. It happened with my daughter and it happened with my son when they were young. Fortunately, they both survived. 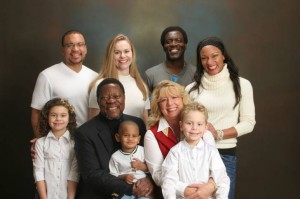 Growing up in the DR Congo, I’ve seen the toll that poverty, and a fight for survival of a different type, can take on a family and on a man’s ability to be a good father. It’s absolutely devastating. You have to imagine what it’s like to wonder where your next piece of bread is coming from, how you’re going to support your family. It’s demoralizing and dehumanizing. There’s no dignity in this. It takes away a man’s self-confidence. He must rely on friends and family; he must essentially be a beggar. Most of my nephews, now in their 50′s, are still in the DRC, and they are unemployed. In their messages to me, they cry out for my help to be able to take care of their families. It’s difficult though because when they receive the money, it’s gone so quickly to put food on the table and pay their bills. I’m happy to help them; that’s not the issue for me. My concern is that they’ve developed what I see as an unhealthy dependency. That’s where training and small business loans from a microfinance organization such as Opportunity International could make a big difference. They would learn to fish and become self-sustaining, providing for themselves and their families, and lifting up their communities as they experience success.

The role that NGOs and poverty-eradication organizations can play is a huge question for me. When I first joined Opportunity International, I loved that we were touching the lives of women. But I felt that something was missing and that we also needed to attend to the needs of men, helping them to become responsible husbands and fathers, to play the role that God calls them to do. It’s especially important that we address this in the DRC, and we’re now in preliminary talks with Un Jour Nouveau (A New Day), a local Congolese NGO launched by Camille and Esther Ntoto. They are Congolese-born American citizens and missionaries who felt called to return to the DRC, to the troubled Eastern part of the country, where they partnered with another NGO, Heal Africa. There, they are helping women who suffered sexual atrocities and are experiencing extreme physical, psychological and emotional stress. As important as this ministry is, Camille and Esther realized that they not only have to treat the outcome of the violence but the root of it. So they started a group called the Sons of Congo, which educates and trains local men to love and care for their wives and, more broadly, to respect women. The results have been very encouraging and their radio programs are reaching thousands of men, including the perpetrators of these devastating acts of violence.

Now, the Ntotos are also working to train the next generation. They’ve established the Leadership Academy, where talented young people receive training to become responsible leaders for tomorrow’s Congo. I met with Esther and Camille when they were in the U.S. and told them, “What you’re doing is so important. How can Opportunity International partner with you in the DRC?” Now they’re in talks with Nadine Pembele, Opportunity DRC’s head of training, and Gilbert Lagaillarde, Opportunity’s CEO in the DRC, to explore partnership possibilities for Opportunity’s Congolese clients to benefit from the Sons of Congo’s training modules. This is my dream: a partnership that has the potential to positively impact the lives of Opportunity’s male clients and their families, helping them to become role models as husbands and fathers in their communities. It would be a great example of local people doing something effective at a grassroots level.

My two children, Niki and Mara, are now both grown adults. Beyond the physical challenges of their bouts with serious illness, one of my internal conflicts when raising them was the time I spent traveling on business and, even when I was home, the many hours I had to be in the office working. But when my son Niki and his wife Kelly became parents, I strived not to give them advice. As hard as I’ve tried, I’ve found myself defending the rights of my grandchildren from time to time, only to be reminded that I too used to discipline Niki and Mara when warranted.

My son began his career as a lawyer but left his job five years ago to establish a church and become a full-time senior pastor. He has such humility and follows his passions, and although he would not say this himself, he is a far better father and husband than I was. Just last night, I was at an event with him in D.C. and he said, “Dad, I must go home. I want to see my wife before she goes to bed.” He’s much more hands-on than I was. He chose what kind of father and husband he would be by watching me: Whenever I was home, I was very focused on my family, but I did have to be away a lot. Each goodbye was difficult but my wife and my kids understood that I needed to work to provide for the family. I thank God that my son has avoided many of my failings and has mirrored and magnified the good things he has watched me do. This kind of mirroring is what children do, and that’s why I know how important it is to train mothers, fathers and the next generation to lead by example, as the Ntotos are doing in the DRC. This is how the Congo will shape its future and not let the past dictate what is to come.

Previous Article
One-Year Anniversary of Grand Opening of Opportunity DRC
Back to Blog
Next Article
What Makes a Good Father? Opportunity Colombia’s Chief Transformation Officer on Fatherhood and the Male Trust Group Project