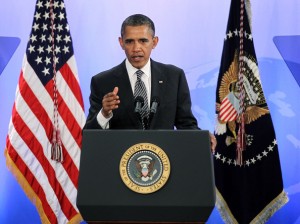 Last Friday, agricultural finance took center stage at the Chicago Council on Global Affairs symposium, “Advancing Food and Nutrition Security,” in Washington, D.C. on the eve of the G8 Summit. President Obama announced a partnership among the G8 member nations, African countries and the private sector called the New Alliance for Food Security and Nutrition, which has a goal of lifting 50 million people out of poverty over the next 10 years. More than 45 private companies – including Monsanto, Dupont, Cargill and Vodafone–have pledged $3 billion. The initiative is largely aimed at equipping African farmers with the resources and tools they need to produce and sell more crops in Africa, where Opportunity International’s agricultural finance programs are already making a difference in five Sub-Saharan countries: Ghana, Mozambique, Malawi, Uganda and Rwanda. 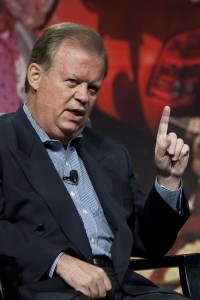 Tony Hall, who serves on Opportunity’s Board of Advisors, is a former US ambassador to the World Food Programme, and now heads the Washington-based Alliance to End World Hunger, applauded the new initiative, saying, “Africa doesn’t produce any more food that it did 40 years ago. So we really need to do everything we can, including bringing in the private sector to help agricultural development in Africa – research, seeds, technology, fertilizers and other resources.” Opportunity was also represented at the symposium by Dennis Ripley, our Senior VP of International Business Development, and Charlene Caldwell, VP of Corporate Relations. 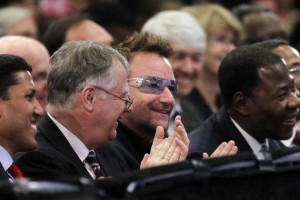 In a 30-minute address to the symposium, Bono, a campaigner in the fight to end global hunger, said this about the new food security initiative: “It’s a new approach to managing these resources as partners, not patrons. Horizontally, not vertically. Not what we give to them but what we, all of us, can do to take plans that are country-owned, country-led and help them succeed.” At Opportunity, we provide affordable, convenient financial services to Africa’s farm families, working in conjunction with strong in-country partners throughout the entire value chain. 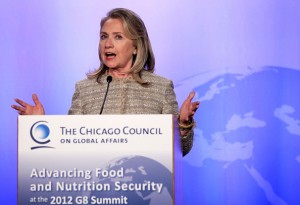 Secretary of State Hillary Clinton closed the symposium with the keynote address, declaring that agriculture has the best opportunity to solve poverty, especially in Africa. She said that we have the power to reduce hunger worldwide by 50 million if we focus on women farmers, who compose 50% of Africa’s agricultural workforce.

Watch this NBC interview (posted on ONE Blog) between Tanzanian President Jakaya Kikwete and Bono.