Meet Our Staff: A Closing Interview with AJ Renold as He Prepares to Leave Tanzania

AJ Renold, mountain trekker, pizza maker, kite surfer, manager of business development and donor relations for Opportunity International Tanzania, hails from Chicago, Ill. He joined Opportunity-US as an intern in their suburban Oak Brook headquarters in 2009. That summer, he helped plan and traveled on the first-ever Young Ambassadors Insight Trip to Tanzania. AJ quickly decided he had to find a way to work for Opportunity in Tanzania, even if a position for him did not exist… yet. 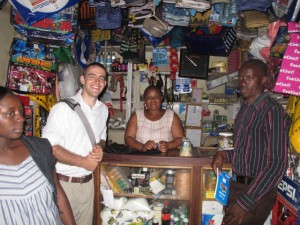 I met AJ in August 2011 on the second YAO Insight Trip. AJ had just moved from Dar es Salaam to Arusha as acting manager of Opportunity’s branches in northern Tanzania. His leadership, tenacity and cultural sensitivity (and confident Swahili) made me forget he was just 24. This past week, I was delighted to visit with AJ in Arusha again as he prepares to leave Tanzania to pursue a master’s of information management and systems at UC Berkeley this fall.

Because he’s training for a trek up Kilimanjaro next month—an appropriate farewell adventure–AJ took me on a six-hour hike through the steep foothills of Tanzania’s Mt. Meru as he reflected on his experience working here over the last two years. (I was expecting a quick chat over local coffee.)

We set off with empty backpacks from his simple, three-bedroom house on the edge of a bustling Arusha village. We stopped on the first corner for bottled water and rolls from a shopkeeper who knew AJ by name. Three giggling children poked my backside with a stick playfully until AJ flipped one over his shoulder to a squeal of delight. Three hundred meters later, AJ found bananas at a price he liked and popped them into the pack on top of the water. We inspected and haggled for tomatoes, cucumbers, and three varieties of avocados at carts tended by women along the next half-mile of road, and we were on our way.

He led me off the road onto a well-worn, red dirt path. Shops and huts became randomly grazing cows, maize and potato fields, blue wildflowers, unbelievably green grasses, and, finally, the 500-meter wide forest border of Arusha National Park. Our mission: tomato, avocado and cucumber sandwiches at the foot of a 100-meter waterfall. As we walked, I asked him a few questions…

When was your first time in Africa?
The 2009 YAO trip. After working in the U.S. office, I had been writing and filling my mind with all this stuff but I wanted to meet the clients and see what was really happening on the ground. I wanted to see microfinance at work. 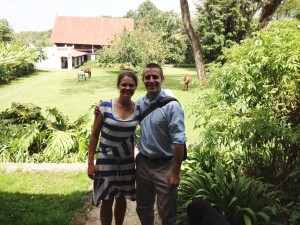 I met Peter Olivier, who was the CEO of Opportunity Tanzania back then. After three days here, I asked Peter if I could come back and be his intern. He needed help so he immediately said yes. But of course, I had to do a lot of internal selling because I couldn’t continue to work for free. I wrote up a job description that was basic intern stuff–lots of blogging and communicating back with YAO in the U.S.–and I was able to get the funding.

How did you get from blogging to managing branches?
The communications stuff was short-lived. When I arrived I quickly realized that Peter planned on having me do a lot more, which was fine with me.

What was that first year like?
Crazy. Within my first six months there was a complete turnover in leadership. I ended up getting my hands into a lot, really fast. What I noticed most in that transition was that the Western authoritative style kind of scares Tanzanians into not working. Now, our leadership style is connected. That is, there is more connection between leadership and staff, mostly because of Ross [Nathan, Opportunity Tanzania’s COO].

What’s it like working under Ross?
Ross started as a loan officer, so he has experience at every level and can relate to the staff. He has BBQs for the staff, cooks for us, and pays for it out of his own pocket. You can tell he doesn’t consider that work. He shows people why they need to learn things or do things a certain way… it’s more about teaching, not telling. That’s been the huge difference. 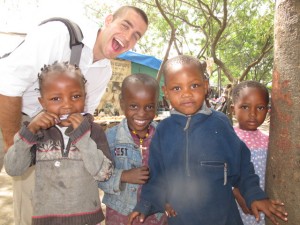 What will you miss the most about living in TZ?
The culture. I can’t really put my finger on it, but it’s the way of life. Tanzanians are happy with where they are. I have some really great expat friends who are here for the same reasons I am. We share the same values and we live the heck out of life. And I have just discovered how easy it is to make my own pizza so I’m pretty much set.

What kind of pizza?
Any kind. We put all different kinds of toppings on it. Lots of garlic. The last one we made was pineapple, masala spices and chocolate. That wasn’t our best. Too much going on.

What about your work here makes you the most proud?
Two things. First, I’m proud to have worked on many projects that have affected our clients and helped us serve them. I feel both proud and humbled when I get to meet our clients on a daily basis. Second is the investment I’ve made in developing leaders. I’m not talking about the head office management but about the leaders in our branches. I met three loan officers my first few days here and two of them are now branch managers. I think my coaching helped that process along a bit.

So you’re leaving Tanzania. Does this mean you are done with microfinance?
I’m going to school to learn more about technology and information. That’s the future of microfinance in the developing world. I’m hugely appreciative of the support I’ve had from Opportunity and all the amazing experiences. I’m just getting started.

Previous Article
A Photo Tour of Colombia & Nicaragua Insight Trip
Back to Blog
Next Article
“The Hype is Long Over” – Microfinance CEOs Respond to Washington Post Article, “Microfinance Doesn’t End poverty, Despite All the Hype”