Innovation to Aid the Horn of Africa: USAID Administrator Rajiv Shah at the Chicago Council on Global Affairs

Last Thursday, USAID administrator Dr. Rajiv Shah spoke at The Chicago Council on Global Affairs lunchtime talk entitled “America’s role in Food Security and the Horn of Africa Famine.” Administrator Shah began with slides and stories from the amalgam of refugee camps that make up the Dadaab camps in Kenya. The camps, which were built for 90,000 people and currently house 380,000, now make Dadaab, according to Shah, the third largest city in Kenya. And every day, more people, mostly Somalian women and children, arrive fleeing civil war, and the famine that has gripped the Horn of Africa for several months. In many cases, the women who arrive have had to leave behind dead children or dying children who were too ill to make the journey. “That’s a choice no mother should have to make,” said Shah.

“In the Horn of Africa, even in the midst of tragedy, there is a common humanity that unites us all.” -Rajiv Shah, Administrator, USAID

Along with the tragic photos and stories, Shah presented a bleak picture of the future. “More than 30,000 children have already died,” he said. “And the UN estimates that 750,000 more will die from this crisis, not just from lack of food but from disease.” And yet, this is a picture, Shah insisted, that should make the U.S. people proud. As a country and an administration, we’ve deeply invested in this crisis. Along with the help of the World Bank, and most importantly, the governments of Kenya and Somalia, more than eight million people who would’ve been highly vulnerable due to the famine are not, said Shah. A significant portion of our investment has been in vaccinations, both for children and animals, in order to prevent disease. Shah showed the audience a slide of Second Lady Jill Biden visiting a greenhouse outside of Nairobi, where they are growing a more nutritious orange-fleshed sweet potato that will give children more vitamin A to better stave off malnutrition and disease. We also understand the cultural aspect of dealing with this crisis, he said. “We know that women are the key to feeding the children. We know that when more income goes to women, they will use it for the family, contributing it to the education and nutrition of the children, and helping the community move out of poverty.” 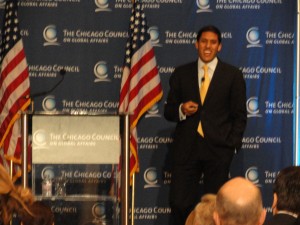 Shah went on to discuss more than just the Horn of Africa crisis. He also reminded the audience of the continued need in Haiti. (“Though U.S. people have given overwhelmingly to Haiti, most don’t know the scale of what is still going on.”) He called attention to Feed the Future, the pledge made by President Obama at the 2009 G8 summit in L’Aquila, Italy, in light of the 2007-2008 food price spikes and the burgeoning global financial crisis at the time. Feed the Future was a response to the G8 leaders’ acknowledgement that these crises would have the greatest effect on more than three billion of the most vulnerable and impoverished people worldwide. He emphasized the need to represent all findings connected to Feed the Future in a transparent way so that the government will continue to support it going forward.

He also talked about the long-term economic and cultural implications of raising children under chronic malnutrition. He said that a crisis of this magnitude could actually affect children’s ability to one day contribute to the economy, stunting their long-term mental and physical development. He cited studies in which MRIs actually show long-term deterioration of brain matter, and other neurological damage, due to undernutrition and malnutrition in early development.

Finally, he emphasized the role that technology has played and will continue to play in empowering hungry people. He showed a slide of the world map ”according to Facebook.” The areas showing the most light were areas of high Facebook use and the places with the least light were no surprise: mostly, they were China, Russia, the Amazon, half of the Middle East and most of Africa. (See image at right.) Shah said that with the explosive growth of cell phones and the projected growth of Internet access throughout the developing world in the future, he expects that in 10-15 years on a map like this, “the whole world will be lit up.” The technological tools that NGOs and governments employ now to communicate with people in need, to ascertain where and who needs the most immediate help, and even to transfer money and goods, will only become more useful with greater technological infrastructure in place. He also called attention to Feed the Future’s new online campaign called FWD (Famine. War. Drought. Relief), a social media- and cell phone-based awareness campaign for the Horn of Africa crisis at usaid.gov/fwd.

This hour-long lunchtime talk with Administrator Shah was a provocative and, ultimately, relatively hopeful depiction of the current and future state of hungry people in the Horn of Africa, and the solution, according to Shah, is innovation. After all, he predicted, “The most entrepreneurial humanitarian organizations will continue to strive to think creatively and innovate to solve the world’s problems because they’re packed with people who care.”