Class Is in Session at Neighborhood School Near Kumasi, Ghana

As U.S. students settle into the new school year, we check in with a Ghanaian school in the IDP Rising Schools Program, an initiative created and implemented by the IDP Foundation, Inc., in partnership with Opportunity International and Sinapi Aba Trust (SAT), which funds the development of quality local private schools in Ghana through school proprietor loans and other financial and capacity-building services. 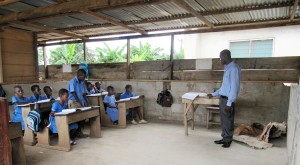 Supreme David Educational Complex is situated in Buoho, outside of Kumasi, in the Ashanti Region of Ghana. Several years ago, Buoho resident David Asenso noticed that parents in his community had to travel long distances in order to take their children to school because the area lacked a neighborhood school. Due to the time and cost of travel, most parents could not send their children to school at all, which meant that not only were the local children not receiving an education but they were sometimes left unattended during the day. So in 2006, Asenso decided to start a school in his house so that these children could study. When the school opened it had six students–four girls and two boys–who were all in nursery. This year, three of those six original students will be entering primary school

Initially, Asenso offered free tuition to his students as well. They only had to pay canteen fees of 20 pesewas daily, which sometimes made it difficult for David to pay his teachers but it encouraged parents to send their children there. At one point, to save costs, David had to work two positions in his school–as the proprietor and as a teacher! He advertised by going door-to-door and taught children poems to recite when they went home, which made the parents proud. As his enrollment increased, he did not have enough classrooms and the wooden classrooms he did have were not appealing to the parents, so many of them took their children out of the school because of the environment. Until IDP Rising Schools (IDPRS) Program came in to support him with a loan to refurbish his school’s infrastructure. Before joining with the IDPRS Program, the school offered grade levels creche through primary 2. Today, it enrolls 130 pupils and has added primary grade 5 this September for the opening of the new academic year. 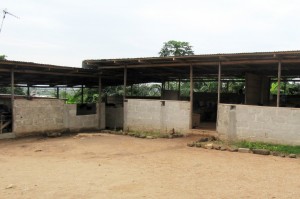 Asenso, part of Tranche 1 Ashanti Region schools, received 16 weeks of training from November 2009 to March 2010. The school’s caterer was trained in June 2010 to improve the nutritional value of the food served to students, and maintain hygiene and sanitary standards. The lead teacher was trained in January 2011 during a one-week immersion training session, and has returned to the school to impart this knowledge to the other teachers at the school. The school has also received school supplies, such as books and games, from IDPRS. David Asenso has taken three loans from IDPRS, which are running concurrently. He used his loans to convert his wooden classrooms into block cement. He is very good at making loan repayments and is thinking of using his next loan to buy a bus for his school.

David says he really appreciates the work of IDPRS and is grateful to the IDPRS program for coming to his aid. He says he can now manage his school very well and that the overall state of the school has improved. David hopes to take his school to a higher level with the help of IDPRS.

For more on the IDP Rising Schools Program, visit idpfoundation.org. For further reading on the Opportunity Blog about education finance initiatives, click here.

Previous Article
Kenyan Government Declares Two Days of Mourning for Victims of Monday’s Fire
Back to Blog
Next Article
What We’re Reading: The Huffington Post on a Microfinance Client in Bogotá