Today’s afternoon plenary session at the 2011 Clinton Global Initiative opened with a Students of the World documentary on Opportunity International’s Banking on Education initiative, which is increasing educational opportunities for more than 120,000 children in underserved neighborhoods in Ghana, Malawi and Uganda. The video was a progress report on Opportunity’s Banking on Education commitment made at the 2009 CGI annual meeting. 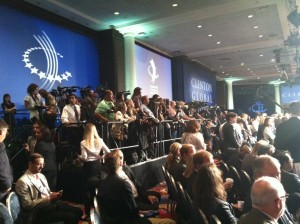 The plenary session closed with remarks from President Barack Obama, who thanked CGI participants for the amazing work they are doing, saying, “Hundreds of millions of people have been touched by what you have done here.”

More than ever before, the world’s population–and its ever-increasing demand for products and services–is putting pressure on the planet. In an era of rapidly depleting and finite resources, businesses and society have the opportunity to reframe how value is created and how consumption acts as a driver for economic growth. This panel session sought to explore how design decisions at the highest levels can drive consumer choices, and innovative marketing and branding can encourage consumer demand to drive more sustainable supply, addressing these opportunities and challenges through the lens of the global food business. The current food system has resulted in high prices paid by the natural environment and by consumer health. Therefore, the panel explored how to ensure sustainability and how to evaluate what is driving consumption patterns to determine both ethical and profitable responses to these challenges. 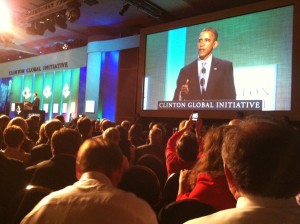 Watch video of the entire plenary session by clicking here.

Today, Sept. 21st, is also the International Day of Peace, so it is apropos that USAID Administrator Rajiv Shah, speaking at the CGI breakout session “Securing Global Nutrition” earlier today, called for all countries to live up to their commitments to support agricultural development in Africa, not only as a moral obligation, but to increase global security and economic prosperity.

While hunger and undernutrition remain persistent problems for the poorest populations of the world, inequities in food production and distribution have most recently been dramatically pronounced in the food crisis in the Horn of Africa. Events such as the drought that has ravaged livestock and crop production in East Africa will continue to create extreme nutrition shortfalls if the overarching challenges to food production and consumption are not addressed. Working to meet the needs for food distribution in times of emergency, it is essential that governments, businesses, and NGOs also collaborate for long-term nutritional security. Dr. Shah also warned that if we do not help to create a stable environment in the Horn of Africa, the area will become more vulnerable to extremist groups. 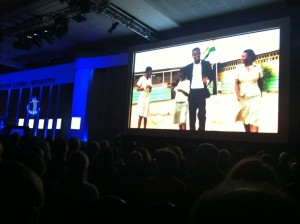 Other participants in the breakout session, which was moderated by The New York Times columnist Nicholas Kristof, included Vinita Bali, Managing director and CEO of Britannia Industries Ltd.; Gebisa Ejeta, Distinguished Professor of Agronomy at Purdue University; and Yolanda Kakabadse, President, WWF International. Kristof said that in the last few decades, the U.S. government and development community had “dropped the ball on agriculture and nutrition.” Shah discussed the U.S. Government’s Feed the Future program, which reverses the trend and calls for country-led agricultural development and partnerships to reduce poverty and increase access to food.

Tune in tomorrow for the last day of CGI 2011, including the plenary session “Engaging Boys and Men as Allies for Long-term Change,” with remarks by Melanne Verveer, Ambassador-at-Large for Global Women’s Issues, U.S. Department of State; and featuring philanthropists, world leaders and thought leaders such as Muhammad Yunus, chairman, Yunus Centre; Paul Kagame, President of the Republic of Rwanda, and more. As well as a number of breakout and special sessions on a number of issues related to gender, technology, business and the environment.

Previous Article
A Look Back at YAO’s Summer Fun 2011
Back to Blog
Next Article
Why is Microinsurance a Powerful Safety Net for Clients?