What We’re Reading: Roger Thurow on Bill Gates at the Symposium on Global Agriculture & Food Security

The following post, “Expert Commentary–The Importance of Innovation” by Roger Thurow, was published today on the Chicago Council on Global Affairs‘ Global Food for Thought blog about the Symposium on Global Agriculture and Food Security that took place today in Washington, D.C..

Bill Gates came to the Chicago Council’s Symposium on Global Agriculture and Food Security with a confession. “I’ve never been a farmer,” he said. “Until recently, I rarely set foot on farm.”

So this was one of his messages to a standing room crowd. In ending hunger through agriculture development, innovation is the key.

“Right now,” he said. “the average farmer in sub-Saharan Africa gets just over a ton of cereal per acre. An Indian farmer gets twice that; a Chinese farmer five times that; an American farmer seven times that. Why is there this huge disparity? Farmers in other regions have tools and techniques and resources that African farmers do not. By offering farming families in Africa and South Asia those advantages, the least productive farms can come closer to the most productive.”

“How,” he asked, “can the world help the poorest farmers grow and sell more? The key is in innovation – combining the best of what’s worked in the past with new breakthroughs, customized to the needs of small farmers.

“Innovation in seeds brings small farmers new high-yield crops that can grow in a drought, survive in a flood and resist pests and disease.

Innovation needs good ideas, and money. Here, Gates said, “The U.S. has a pivotal role to play in helping farming families lift themselves out of poverty and hunger. At the same time, of course, we have a big budget deficit and foreign assistance is an easy target for reduction. We need to tell people over and over why this spending is a good investment, why it’s worth it even in tight economic times.”

First, he said, “these investments are going to countries committed to change.”

“The second reason agricultural investments are worthwhile,” he added, “is that farming is a business. As you provide poor farmers business assistance through new tools and technology and access to markets and capital, it allows them to move to self-sufficiency with the help of market forces.” 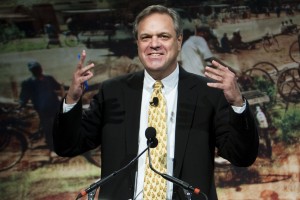 “The third reason agricultural development is a smart investment is how effective it is. In country after country, these approaches have improved the livelihoods of small farmers while reducing poverty and increasing economic growth. It’s proving the point again and again: helping poor farming families grow more crops is the world’s single most powerful lever for reducing poverty and hunger.”

These comments from Bill Gates, whose foundation with his wife Melinda has committed $1.7 billion to help farming families over the last five years, suggest again, as we’ve often said in this column, that we have arrived at a moment of potential opportunity that shouldn’t be squandered. The budget crisis, he suggested, shouldn’t be reason for the U.S. to cut back on its promises to increase agriculture development aid, to scale back its Feed the Future ambitions.

“This is the first stage of sweeping change for farming families in the poorest parts of the world,” Gates said. “We have an historic chance to help people and countries move from dependency to self-sufficiency–and fulfill the highest promise of foreign aid. In the past we’ve invested aid in Brazil and India and South Korea, and they are all now dynamic actors in the global economy–some even joining to help provide aid to others. This is our hope for the countries of Africa and South Asia as well.”

Previous Article
What We’re Watching: Today’s Grand Opening of Opportunity DR Congo in Kinshasa
Back to Blog
Next Article
We Have a Winner in the Tanzania Correspondent Contest