Today marks an exciting event! It’s the first official UN International Day of the Girl Child, a day to highlight, celebrate, discuss, and advance girls’ lives and opportunities around the globe. The campaign to establish this day was led in the U.S. by School Girls Unite, and internationally by Plan International and CIDA.

The Day was officially enacted by a UN General Assembly Resolution this past March, which recognized that the “empowerment of and investment in girls” is “critical to economic growth” and to achieving the UN Millennium Goals (including the eradication of extreme poverty). It stated that girls’ “meaningful participation in decisions that affect them” is key in “breaking the cycle of discrimination and violence and in promoting and protecting the full and effective enjoyment of their human rights.” It recognized that “empowering girls requires their active participation in decision-making processes and the active support and engagement of their parents, legal guardians, families and care providers, as well as boys and men and the wider community.” 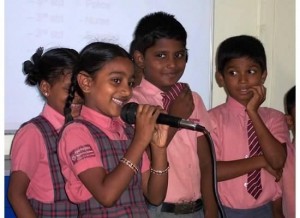 The theme of today is “Too Young to Wed.” The Nike Foundation finds that when a girl receives seven or more years of education, she will marry four years later and have 2.2 fewer children. When women wait until after their teenage years to have children, it dramatically improves maternal and infant mortality. Giving girls the tools to take a more active role in public life, and the skills to be financially independent, not only improves their well-being but that of their future children too! And this week, this emphasis on the importance of education is even more poignant as we read the sad news that Malala Yousufzai, a champion of girls’ education and girls’ rights in Pakistan, and two other girls were shot by extremists while walking to school. Speaking today at a high-level panel discussion, UN Secretary-General Ban Ki-moon noted that the Day is also an occasion to highlight the “alarming” levels of discrimination, violence and abuse that girls face worldwide. “The attack on [Malala] was abhorrent and cowardly,” said the Secretary-General. “The terrorists showed what frightens them most: a girl with a book. Nowhere in the world should it be an act of bravery for a young girl to go to school.”

In honor of the Day, we’d like to share the story of one little girl who is full of hope that she will be able to achieve her dreams. She is the recipient of a scholarship through Opportunity’s education finance program in India. Her name is Ramya, she is in first grade and she wants to be a doctor when she grows up. Several of our supporters and staff met her while on an August Insight Trip to India, and she clearly stole their hearts. Adele Nandan, director of our International Education department, says, “Whenever I look at this picture, Ramya makes me smile. She is so excited to share her dreams with us when she grows up.”

At Opportunity, we’re inspired by the hopes of little girls around the world, who dare to dream about achieving their goals and receiving an education, so that they can have a voice and have choices that their parents never had. That’s the significance of the International Day of the Girl. And it’s why we’re motivated to empower girls.

Previous Article
What We’re Pinning: Powerful Women of the World
Back to Blog
Next Article
Blog Action Day: Beduith from Colombia and “The Power of We”