Opportunity Celebrates 40 Years at “Side by Side” Gala in Minneapolis

By The “Side by Side” Volunteer Committee

Last Thursday night, more than 400 guests gathered at International Market Square in Minneapolis, Minn. to celebrate Opportunity International‘s 40th anniversary at a gala event, “Side by Side: Celebrating 40 Years of Opportunity.” The evening included entertainment by Minnesota resident and contemporary Christian singer Sara Groves and the African musical group Duniya Drum and Dance, and featured a reception, dinner and a silent auction for a number of prizes including a five-day Insight Trip to see Opportunity’s work in Colombia. 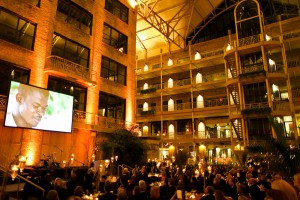 “Side by Side” drew attendees from the Twin Cities’ business and philanthropic communities. Special guests included Don Whittaker, son of Opportunity International founder Al Whittaker; Paul Tshihamba, missions pastor of Christ Presbyterian Church in Minneapolis and a Democratic Republic of Congo native; Mark A. Thompson, vice chair of Opportunity’s Board of Directors; Ted Moser and Sandra Davis, members of the Board of Directors; Frida Mungoma, education finance manager at Opportunity Uganda; and members of the Minnesota chapter of Young Ambassadors for Opportunity (YAO). The event co-chairs were Kelly Palmer and Katie McElroy, who are Minnesota-based members of Opportunity’s Board of Governors. Honorary event co-chairs Mary Lynn Staley (chair of the Board of Governors) and Polly McCrea (former chair, Board of Directors) were honored for their long-time service to Opportunity and its clients. Over a combined total of 23 years, with their husbands Warren Staley and Robert McCrea, these two couples have inspired more than 120 families to become supporters of Opportunity and their gifts have impacted more than 104,000 lives in the developing world. 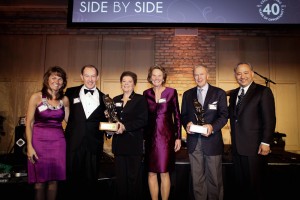 In an evening of community and celebration, one of the highlights for attendees was the remarks by Don Whittaker, who reflected on his parents’ lives and their commitment to heeding Christ’s call by empowering the world’s most impoverished people. Don told the story of how one day, back in 1971, his parents Al and Marion Whittaker were sitting in church listening to a speaker articulate the need for businessmen to help people in need start and sustain businesses in the poorest countries in the world.

On the drive home, Al, who at the time was President of the International Division of Bristol Myers, told Marion he felt he was being called by God to do what the speaker had called for in church. Marion’s direct response was, “It’s about time you stop making rich people richer and start doing something for the poor.” By the fall of 1971, 53-year old Al had tendered his resignation. 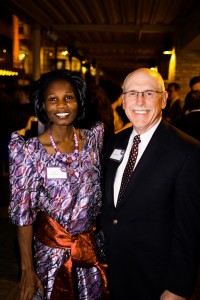 Don reflected that his father had exchanged so much to follow this calling. He exchanged a title for a calling from God, a prestigious community for some of the most impoverished communities on earth, and big-name corporate clients for individual clients with names like Ildefonso, Alcantara, Huerta, Kwabena Darko and Namwazi.

Don closed by sharing, “Our family has been blessed. We have been given a firsthand look at what God can do when He touches the hearts of individuals who respond to Him in simple faith …whether they be business-minded women, teachers, laborers or a little boy on a hillside. That is the legacy of Dad and Mom.” 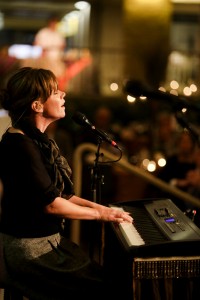 Moved by the spirit of the evening, long-time contributors expressed their ongoing commitment to Opportunity’s mission. Peter Deanovic, of the national YAO Board of Directors, stated, “I promise to carry on [Al Whittaker’s] legacy, working side by side with fellow supporters, staff and clients to transform even more lives. I promise to do this joyfully and with a servant’s heart.”

Frida of Opportunity Uganda said that this work is so important because “every parent on the planet wants their child to have opportunities to live their best life. And every child wants nothing more than to understand the world, and participate in it fully–body, mind and spirit.”

Betty Jane Hess, chair of the Board of Directors, reflected on Opportunity’s work in its 40th year: “What cannot be overestimated is the ability of all of us to effect positive change in the world and to engage others in this vision. Opportunity is growing. But our growth is not just about going wider, but going deeper. We’re not interested in placing dots on a map, but building strong sustainable institutions that are woven into the fabric of our clients’ communities and countries.” 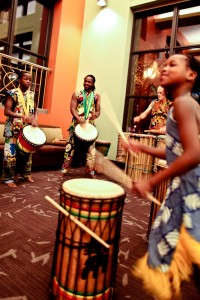 After all, said Emily Vennerstrom, co-chair of YAO’s Minnesota chapter, “The work of Opportunity International changes lives. It changes mine, it changes thousands of lives in the world’s poorest countries, and I hope that you allow it to change yours.”

If you would like to help support Opportunity’s mission, we invite you to come alongside their work. Visit opportunity.org/support to learn how you can partner with them.

This post was written by the “Side by Side” Volunteer Committee. All photos are by Andrew Vick of Vick Photography.

Previous Article
Today, Opportunity International and Empact’s Young Entrepreneurs Are at the White House
Back to Blog
Next Article
Innovation to Aid the Horn of Africa: USAID Administrator Rajiv Shah at the Chicago Council on Global Affairs