I stumbled my way to Dionel’s front door, inching down the side of a steep hill, steadying my feet as I walked. His home sits precariously on a mountainside, at risk because of geology, but even more because of geography.

He lives in Colombia in an area known as the violence corridor.

The history of Colombia is one of ongoing violence and pain. In 1964, Colombian military began to fight back against a group of rebel militia who were attempting to break free from Colombian governmental control and start their own republic following a decade-long civil war known as La Violencia. This initial conflict resulted in the birth of FARC—the Revolutionary Armed Forces of Colombia—and marked the starting point of a 50-year battle between the military and guerrilla armies.

FARC grew stronger as it deepened its work in the drug trade, and it used the money it earned from trafficking to fund its ever-growing militia. Backed by the wealth of cocaine, the FARC had the resources and the size to seize control of “as much as one-quarter of Colombian territory,” according to the Washington Post. The Post also recalls how FARC “terrorized Colombians with kidnappings, bombings and brazen attacks that came to represent a major threat to the government.” FARC was a seemingly-unstoppable rebel group that killed more than 220,000 and displaced nearly 7 million people—meaning that Colombia has more internally displaced people than any country in the world.

Dionel is one of them.

As a child, Dionel lived on a farm in the mountains of Colombia. Neither he nor his wife has ever been to a single day of school; they are completely illiterate, and cannot sign their names. When the guerillas attacked their farms, they were forced to to flee and resettle in a new community where they began to raise their children and attempt to rebuild their lives.

Life has been exceptionally hard for Dionel and his family, but you would never know it by looking at him. His face displays a perpetual smile. He has lost everything he has ever known, and yet he is full of joy and hospitality.

Sitting in his cinderblock home, we laughed and shared stories. He spoke with pride about his children who are all enrolled in school—all of whom can read and write. For Dionel, this is the most incredible accomplishment he can imagine. His kids have opportunities that he never had; they are learning things that he never learned.

I took his photo and scribbled my notes as I conducted yet another interview that day. I was tired and sweaty, but happy to be chatting with such a warm and hospitable friend.

And then Dionel disappeared behind the sheet he had hung as a makeshift wall. He returned a moment later with a bracelet in his hand—woven, black and white, crafted from plant fibers. 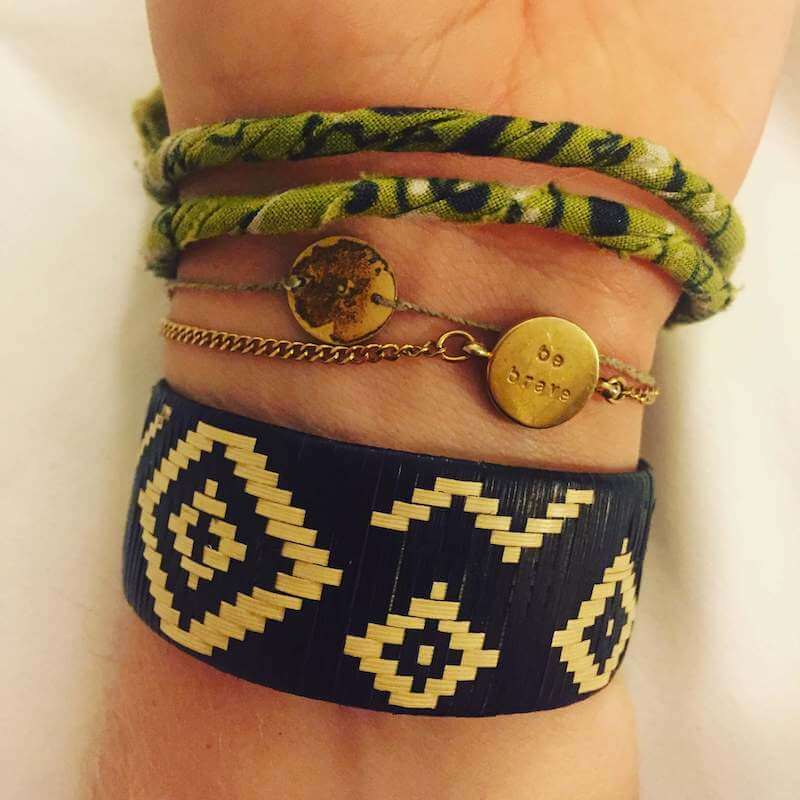 He extended the gift to me.

At first I tried to decline the offer. “Sell it,” I said, “I’m sure you could earn money for that.”

He told me that he made it himself. He learned to make these bracelets as a boy on his farm. They were the simplest, smallest vestiges of his past life, and he was offering one to me.

I added it to my wrist—full of little memories from around the world. “Be brave,” said one bracelet. Another read, “Joy.” And then this one. This black and white treasure that, to me, symbolized generosity and hospitality and love. It reminded me that the past matters, that memories matter, and most of all, that my sweet friend Dionel matters.

When I wear it, I’m reminded of that hot day nestled on the mountain in central Colombia. I’m reminded of the months I spent being welcomed into homes around the world, sitting across from incredible women and men whose stories wrecked me and stitched me together all at the same time. I wear it and remember. I wear it so I will not forget.

Allison is a freelance storyteller who spent this fall traveling on behalf of Opportunity International to Colombia, Mozambique, Malawi, Tanzania, Rwanda, Uganda and India.

Previous Article
Day 8: A Ride in a Time Machine
Back to Blog
Next Article
Day 6: The Gift of Abundant Sameness