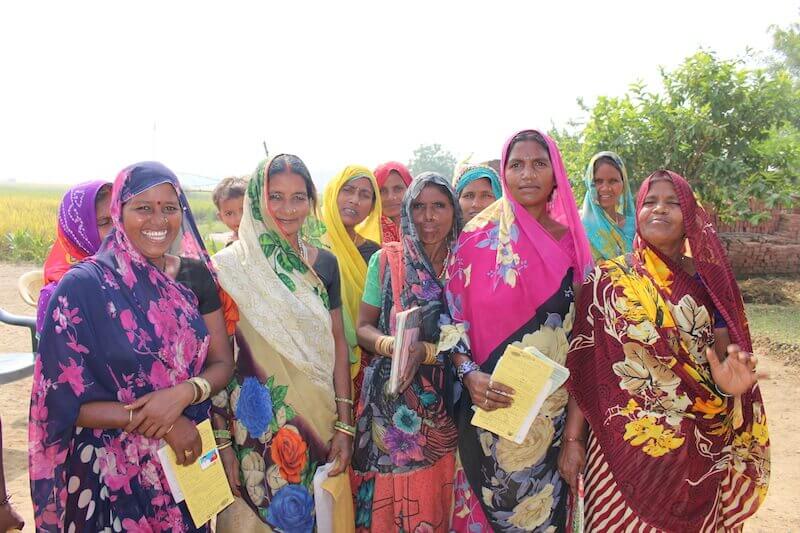 One month ago while the rest of the world was in a meltdown over a certain election, I was thankful to be tucked away in a chaotic corner of India visiting some amazing female entrepreneurs who are changing the course of their families’ futures. There I was in a rural village outside of Varanasi, completely in awe of someone’s toilet. It wasn’t the toilet itself that struck me (I’ve seen and used a squat toilet before), it was the vibrant yellow colour it was painted. In our society, toilets are often hidden in a bathroom or built in dingy brick buildings to make them discrete and non-confronting. But here, right in front of me, was a bright yellow latrine.

Knowing what life is like for many families living in India, it made sense to me why the toilets were painted yellow. For many people, access to sanitation services is low. In fact, 75 percent of the rural population is forced to defecate in the open due to the lack of access to toilets, and for women in particular this can lead to a whole host of health and safety issues. In the Western world, yellow is considered the brightest colour to the human eye, and all around the world, it is seen as the colour of the sun. As such, yellow has come to represent many things like life, energy, happiness and hope. These are feelings which don’t necessarily link easily to the idea of a toilet. However, these yellow toilets literally were a beacon of light for those searching for the bathroom in the middle of the night. They were a symbol of dignity and hope for a better, healthier future.

India has always been a country that excites the senses—the smells, the sights, the sounds. But it is the colours that stay with you long after you have returned home; they are the lasting gift. From the deep orange marigold flowers that bejewel almost every celebration to the crisp white outfits worn by religious leaders, there is no place that represents colour better than India. Colour in India represents energy and vibrancy. It breathes life and soul into everyday living that is a pleasure to behold.

When asked to describe poverty as a colour, I imagine most people may initially think of black or brown. However, I have seen that colour can transcend language and culture, race and religion, wealth and poverty. By its very presence, colour communicates the hopes and dreams of the people it surrounds. It represents living life no matter what the circumstances. Each of the women I met, whether she was a weaver or milking buffalos, had hopes and dreams, had a story and a new colour to add to the canvas. These were women who had received small loans, started their own businesses and were doing what they could to put food on the table, care for their families’ health and send their kids to school. These were women who were living life to the fullest.

Of all the things I took away from this trip, the colour of life was the greatest gift. I have never experienced such a kaleidoscope of emotions. There were moments when I felt overwhelmed, lost for words, caught in chaos and emotional. But there were also times I felt humbled, inspired and joyful. The women I met taught me to take pleasure in all life has to offer. Like looking up at a big blue sky, like admiring the line-up of incredible rainbow coloured saris, like getting excited over a yellow latrine.