Day 11: The Gift of Joyful Patience 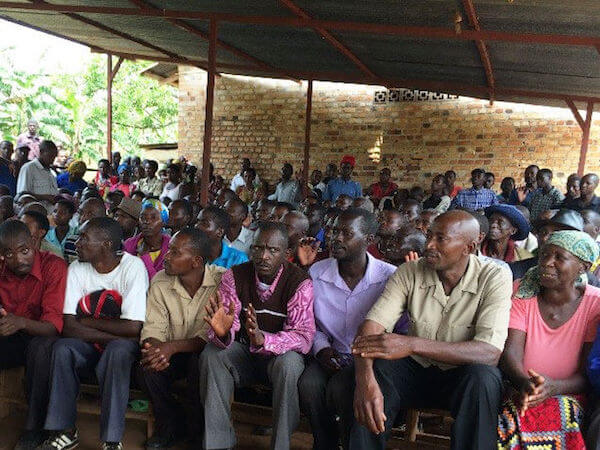 The holiday season can be trying for those of us in the U.S. who are used to getting everything NOW. We want next day delivery from Amazon Prime, short lines in stores, fast food and quick transport to our destinations. We are not very patient people.

My husband Ted and I were lucky to be able to go on an Insight Trip to Rwanda and Tanzania last February. There, we witnessed a more patient type of waiting, and it was accompanied by sincere JOY!

On our third day in Rwanda, we were scheduled to take a bus ride into the countryside to meet farmers and entrepreneurs who were recipients of Opportunity loans. We found out as we boarded the bus that the trip was expected to be about three hours each way, even though we were only going 60 miles. Rwanda is the Land of a Thousand Hills, and there aren’t any super highways!

A couple of hours into the trip, we took a bathroom break at an Opportunity branch bank. There was a Trust Group meeting going on outside the bank, and it was exciting for us to see the Trust Group in action—needless to say, our short break took much longer than planned. Back on the bus, we discovered there was another Trust Group who wanted to meet us. So, we stopped there and spent quite a bit of time listening to a woman who wanted to start a daycare center, a woman who had started a restaurant and some farmers. I left that meeting thinking, “THIS is what Opportunity is all about!” Their needs were great, and their stories were inspiring.

Back on the bus, we were told that we were now very late for our final stop, which was to meet with a co-op of rice farmers. The group had evidently been waiting for us for over two hours. When we arrived, we didn’t see anyone; my thought was that they had given up on us and gone home. I know I would have!

We then began to hear singing. Following the sound around to the back of a building, we were met by a group of about 200 people, all singing and dancing. They literally danced us into their circle! Those of us who weren’t snapping pictures right and left immediately joined into the dancing (including my husband Ted, who never dances). We were told later that we danced pretty well for a bunch of “old white people”…quite the compliment! Once the welcome had exhausted itself, we were seated at the front, asked to tell the group about ourselves, and then listened for over an hour to members of the group tell their stories.

Later, as I thought about the day, I was overwhelmed by the welcoming joy that this group of people expressed. And then it hit me that this joy existed in spite of their having to wait for us for over two hours to arrive! If that had been me—or most anybody else that I know—I would have been pretty irritated after two hours of waiting. I probably wouldn’t have stuck around or I would at least have let my irritation be known. Their patient joy (and joyful patience) were amazing gifts to us. When my patience is tested back home, especially during the holiday season, I try to remember their beautiful example!

Previous Article
Day 12: Robinah's Drum
Back to Blog
Next Article
Day 10: The Gift of a Very Important Lesson