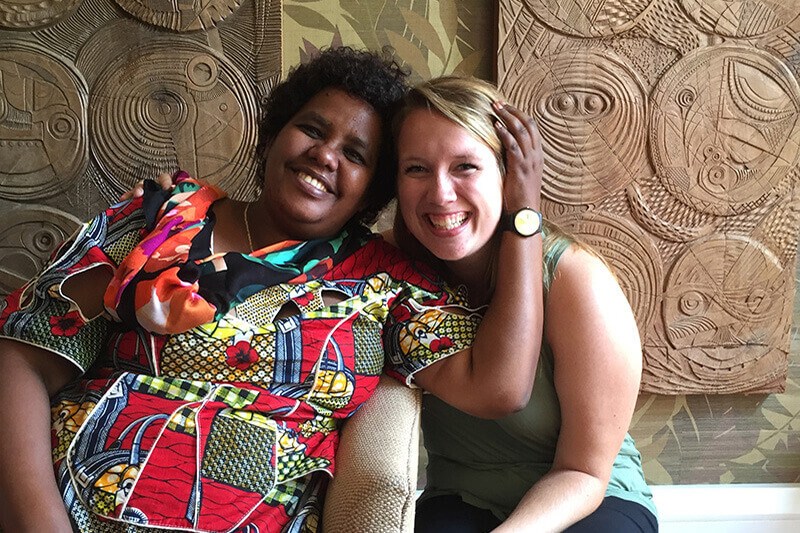 Peace isn’t a word we hear very often these days. When we turn on the news, we see reports of bombs and rebels and gun violence. We hear stories of a life taken on the other side of the world, and yet another taken just down the street. We hope for peace, but we don’t see it materializing. If anything, it feels like we are becoming increasingly less peaceful, as opposed to more.

But on a day like today – the International Day of Peace – I need to remind myself that I am wrong. Peace is possible. And I am confident of that because I have seen it with my own eyes.

Last week, I was in Rwanda – a country that knows violence and devastation better than just about anyone. In 1994, a years-long civil dispute came to its head and neighbors began killing neighbors. In an impossibly bloody 100 days, Rwandans killed nearly one million of their own, perpetrating one of the most gruesome and swift genocides in history.

But it is here in this broken, violent history that I was reminded yet again of what peace looks like in action.

Out of their destruction, Rwanda has risen to become a leader in East Africa. When you walk through the streets of Kigali today, you can’t help but fall in love with the beauty and people and the life that is bubbling up. Over the past 20 years, Rwandans have rebuilt their country on a foundation of peace. And I’ve asked, again and again, how? How could you possibly move beyond such a tragic past? And the answer I get is the same each time – what other option did we have? They reached a point during the genocide when they were faced with only two choices: move forward in a spirit of forgiveness or destroy the entire nation. There was no third way. And so Rwanda did the seemingly impossible – they began to forgive.

People have returned to their homes, living next door to people who killed the rest of their families. Communities are rebuilding and redefining what it means to be neighbors. Each and every person chooses to identify not as Hutu or Tutsi, but as Rwandan. Because putting aside differences and focusing instead on similarities is how they, and we, begin to relate to one another.

It is a not a blind acceptance of the past, but rather an acknowledgment that in order to move forward, we must first forgive one another. We must re-learn to live in community, even when there are scars and histories that threaten to prevent it.

One Opportunity client, Beathe, shares her horrific genocide story again with tears in her eyes.

And yet Beathe has chosen peace.

Today, she runs a booming business creating beautiful jewelry that she sells locally and exports to the US. She employs a team of hardworking artists, has raised her children into loving adults, and recently welcomed a new grandchild. She is a powerful, unstoppable force for good.

Beathe is not alone.

Every person you meet in Rwanda has a story of pain and destruction, but they also have a story of hope and peace. They are still standing, alive and smiling, despite everything that has happened to their friends and families.

I listened to my friend Didier tell me that his wife was an orphan, and I immediately, instinctively offered my condolences. But then he reminded me, “Everyone here is an orphan. It’s totally normal. If you have a parent, it is strange. If you have grandparents, most of us don’t even understand what that means. We just assume you are from another country.” What a horrible truth to grasp.

Didier has his own family now – two kids that he is raising together with his wife. His kids will know their parents. His children will not have to say, “Oh yes, of course we are orphans.” What more beautiful demonstration of love and peace could there be than a family who is able to grow up together, support one another and create a future?

Sitting across from people like Beathe and Didier, you know that peace is possible because you see it in their faces and their stories. You hear the reality of the past – the acknowledgement of the suffering that shaped their lives – but you also hear the hope of the future. They, like everyone in Rwanda, know that they are creating a place that is better than it was before.

That is peace. That is reconciliation.

And if that kind of forgiveness and love can arise from a genocide, then it can happen anywhere.

This International Day of Peace, let’s remember the example set by Rwanda. Let’s choose to love, understand and build community with each other. Because our world is broken and violent and crying out in pain, but peace is possible.

Allison Kooser is traveling around the world meeting, interviewing and being amazed by Opportunity International clients. She spent two weeks in Colombia, traveled to Mozambique and Rwanda and is off to Tanzania next. Follow along as she travels on Instagram at @opportunityintl.