Each day of the Colombia Insight Trip with Opportunity International (OI) has provided a feast of unique experiences and memories to treasure. Thursday was no different. Since Colombia does not observe Daylight Savings Time, the day started very early. By 6:30AM, kids were excitedly playing soccer on the beach while a large group of half-submerged bathers formed a circle about 50 yards out into the glimmering Caribbean. The early morning shower that left puddles on our patio did not dampen anyone’s spirit; neither those enjoying all that Cartagena has to offer, nor our group as we set off on another adventure.

Passing by the many slices of Cartagenean life such as modern high-rises, the walled Old City (founded in 1533), the new Convention Center with its Concrete Conference and the bustling port (think combination of Miami & Charleston SC), our destination for the day was Arjona, a city of less than 100,000 people up in the hills about 20 miles, and 1 “long” hour, away. On the outskirts of town, down a bumpy dirt road, we were led into an open lot dedicated to a daily Vacation Bible School for the children of local OI clients. There, we were greeted by a multitude of smiling faces from not only the kids (ages 4-12) but also from the volunteers who assist Ricardo in running this “school” for the barrio’s children.  Since Colombian schools operate in shifts, one of the local churches started operating this VBS in January to instruct and allow for play time while the children are not attending their school.

The kids were separated into two different areas by age (4-7 & 8-12), and their “assignment” for the day was to paint a clay piggy bank that each one had been provided. Before our arrival, they had been taught about the concept, as well as the importance, of savings.  Each painted piggy-bank resembled the individuality and uniqueness of every child, with many of them sporting the national colors of Colombia, a vision that we saw constantly during the trip. Our extended group was ecstatic to be able to provide “initial funding” to each of these adorable children’s savings account, even if it was to the tune of only $100 pesos, equivalent to about a nickel. 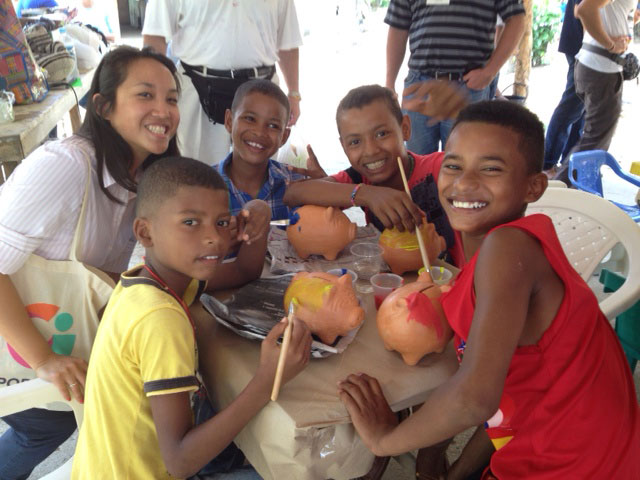 As an encore to the visit, all of the children and their leaders entertained us with an energetic, aerobics-style rendition to “Soy Un Campeon” which translates to “I Am A Champion”.  Video footage caught many of the American visitors dancing & moving in rhythm with the children.

Through its many efforts in Colombia and other countries, Opportunity International is having a resounding impact on battling the deplorable cycle of poverty found all over the world. Members of the group asked the kids about their intentions with future monies that would be saved in their new piggy-banks. Expectedly, some of the responses conveyed a desire to purchase something for themselves, but most were focused on helping their parents through tough times, paying for required school items such as uniforms or books, or saving to start their own business someday. MUY IMPRESIONANTE!

About Greg and Beth

Our journey together began almost 24 years ago in Dallas and now we reside in Charlotte NC, with stops along the way in Austin and the Kansas City area…all wonderful BBQ places.   We have three wonderful (most of the time!) children Ashley (28), Christian (21-University of Miami senior) and Daniel (19-University of Alabama freshman) as well as a playful 10 year-old black lab named Sophie.

After 25 years in corporate America within the financial services industry, Greg is now providing business strategy and consulting services to the industry.  He also has a few business ideas (both for-profit and not-for-profit) incubating at various stages currently and hopes to launch them in the near future.  Greg also recently started working again with clients as an advisor after a hiatus of about 8 years.  As a CFA, he especially enjoys the investment side of the business.  Greg grew up in Latin America (Chile & Brazil), so the chance to see OI’s work first-hand in a familiar setting is truly special.  Because of his foreign background, Greg has been heavily involved in foreign missions work at various churches and has been able to travel to Spain, Cuba, Nicaragua and Costa Rica on church trips.

Beth has enjoyed the chance to stay at home with our two sons and to raise them into the awesome young men that they are today.  Throughout these formative years, she has volunteered at their schools and at church, been an intrepid cheerleader/videographer at numerous sporting & musical events, and has also been an incessant prayer warrior for them, our family and our community.  Officially an inactive attorney in the state of Texas, Beth looks to launch a real estate career here in the Carolinas after we return from Colombia.

Praise God for this opportunity (no pun intended :) to visit Colombia and to see how OI’s work has an impact on local people and communities who otherwise might not have any chance to forge a living.

Previous Article
The Story of the Girl
Back to Blog
Next Article
YAO Leaders Join 60,000 Change-makers at Global Citizen Festival