Lend Your Voice to The Global Appeal for Responsible Microfinance

Today, in front of the 3,000 attendees of the Convergences 2015 World Forum in Paris, microfinance leaders unveiled the “Global Appeal for Responsible Microfinance,” a landmark document that urges all microfinance stakeholders to take concerted action to ensure a strong and principled microfinance industry. Over the past several years, the microfinance industry has made significant strides in advancing responsible practices that protect and appropriately serve clients. 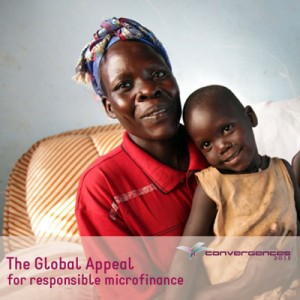 However, a more united, deliberate effort needs to be taken by stakeholders at all levels–including microfinance professionals, investors, and policymakers – to ensure the continued success of the industry. To that end, the Global Appeal asks signatories to outline their plans for improving their own practices–making measurable, time-bound commitments on how they will contribute to a responsible sector. Signatories are called to announce their plans by the end of December 2013.

The Global Appeal marks an exciting event in microfinance history–signifying a moment where the industry comes together, with one voice, to support responsible microfinance and to commit to a higher standard.

The publication of this document represents a unique collaboration between two organizations that have sought to improve practices of the microfinance industry: Convergences 2015 and the Microfinance CEO Working Group.

Convergences 2015, a network of organizations committed to achieving the Millennium Development Goals, released an earlier version of the document, known as “The Paris Appeal for Responsible Microfinance,” in spring 2011. This appeal outlined the need for fundamental principles in microfinance and received extensive support, with endorsements from 1,500 individuals and 500 organizations. Since its publication, the microfinance industry has advanced its efforts to develop responsible and client-focused practices. The Global Appeal recognizes these achievements and seeks to tangibly motivate further action.

Previous Article
My Visit to King George School with our New CEO Vicki Escarra
Back to Blog
Next Article
What We’re Pinning: Today, a Message of Understanding with Pins for Peace