The following post is by Harry Turner, CEO of Opportunity’s Global Microfinance Operations, recounting his recent trip to DR Congo where he met Papa Roger, an extraordinary father and a father figure to a group of 17 orphaned young men. 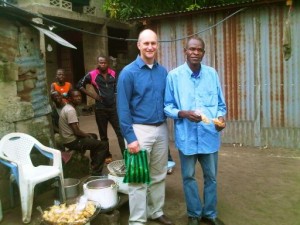 On our trip we visited client Papa Roger. There couldn’t be a more holistic view of a person committed to transformation than Papa Roger.

Papa Roger’s business is to cook sweet potato chips (you can see the bags of them in the photo at left). He wakes at four in the morning and cooks through to around midday because the quality of power in the afternoon makes it impossible to cook. (Indeed, the power was out when we visited him.)

The great part about his story is that he employs a bunch of young orphans (17-20 years old) to sell his product. You can see some of them behind us in this photo. Papa Roger had already brought up his own children and they’re now in school, but he took in these young men who had been quite destitute prior to meeting him. Now they have a home and an income, and they receive schooling in the evenings. Papa Roger listened with a proud smile on his face as one of the young men described how he had come to Kinshasa and how Papa Roger had provided him a home and a livelihood.

I asked Papa Roger how he used his loan and he replied, “To buy more stock.” At this stage, the income of the young men who work for Papa Roger is limited by the amount he can produce. When I asked him what his dream was for the future, he described that he wanted to buy a generator so he could produce more throughout the day, to provide better livelihoods for the young men whom he supports. He also had a dream that he could have a savings account and he wanted to encourage the young men who worked for him to have savings accounts as well so that they could save for the future.

These, I believe, are great dreams.

This Father’s Day, meet Opportunity’s male clients like Papa Roger, who take care of their children, and the children in their community, by using loans and training to grow their businesses, provide for their families and employ their neighbors. You can contribute to the livelihoods of these men at opportunity.org/fundaloan.

Previous Article
Photo of the Day: One Laptop, One Big Challenge for Technology Education in Africa
Back to Blog
Next Article
A Story of Service: A Trust Group Helps Keep their Community Clean