Theologian Dietrich Bonhoeffer and Freedom for One Another

In my work as a writer for Opportunity International, I think a lot about what inspires people, and I spend at least an equal amount of time considering what inspires me. To be truthful, when I look at the world around me, I often feel as though we (as a collective) have no heroes. Or, rather, perhaps we recognize no heroes. We have information about heroes, and we watch movies about heroes, but this doesn’t often seem like it matters. What does it matter if we know about something wonderful, but fail to live up to it? 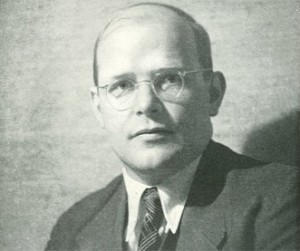 I recently attended a local conference about the life of Dietrich Bonhoeffer, a German pastor and theologian who lived through the two world wars and died a prisoner of Hitler’s Third Reich. I know you’re wondering now—what can this possibly have to do with microfinance, with heroes, or with you? And this is exactly what I was wondering the entire time I spent listening to lectures about him, and to music inspired by his poetry and letters, and as I continue to read Eric Metaxas’s biography about him, Bonhoeffer: Pastor, Martyr, Prophet, Spy. I am still getting to know Dietrich Bonhoeffer, but the more I learn about him, the more I respect and admire him—and the more I am inspired to look for ways to emulate the spirit with which he lived his life.

Dietrich Bonhoeffer was born into a family of rigorous intellectuals who lovingly drove one another to reach their fullest potential, and so he grew up thinking deeply and critically about pretty much everything. By age 23 he had earned a Ph.D. in theology, and was waiting to be old enough to be ordained as a pastor. As Hitler’s power grew stronger and his regime strove to mold the German church and people into its agenda and ideology, Bonhoeffer rallied the international church to their defense. He became deeply involved in the African-American church community during the Harlem Renaissance, and his growing understanding of the race issue in America at that time deeply informed his understanding of the growing problem of anti-Semitism in Germany. As the dark evil of the Nazi empire consumed much of Europe, Bonhoeffer trained young German men and women in the ways of Christian discipleship, courage and justice—a small, bright light against the dark. What he is most recognized for today, however, is his part in an attempt to assassinate Adolf Hitler—a controversial role for a pastor. 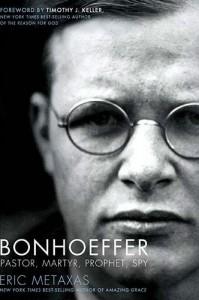 There are many aspects of Bonhoeffer’s life and thought that speak to me. Today, the ones that speak to me the loudest are his deep love for those unable to speak for or defend themselves, and his understanding of the Christian’s freedom in Christ to stand against the world’s ills, in solidarity with the defenseless. In a letter to his friend Eberhard Bethge, Bonhoeffer describes the freedom of God for humans, which leads to our subsequent freedom in Christ to fully live for one another, to his glory:

"It is a question of the freedom of God, which finds its strongest evidence precisely in that God freely chose to be bound to historical human beings and to be placed at the disposal of human beings. God is free not from human beings but for them. Christ is the word of God’s freedom."

In the quote above, Bonhoeffer speaks of a miracle which the Christian church annually honors: that God freely became human, lived among us, and was killed by those whom he loved. His death brings freedom. Bonhoeffer understood that we also are free for one another, and his life and death assert this freedom. As Christians, we talk about freedom from sin, which is a truth of the gospel. But also true is the freedom of the church, and of Christians everywhere, to stand in solidarity with the oppressed, the hungry, the downtrodden and the marginalized. Christ is the word of God’s freedom to you and to me. It deserves an answer beyond mere appreciation. That is why I do the work that I do for Opportunity.

Previous Article
Not Just Global, But Local: Opportunity-US Staff Day of Service
Back to Blog
Next Article
Obama Announces Food Security Partnership at Chicago Council on Global Affairs Symposium Before the G8