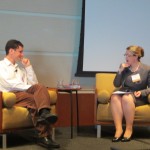 On Friday, I attended the 8th Annual Chicago Booth and Zell Center Microfinance Conference along with Young Ambassadors for Opportunity. It was my third consecutive year attending this conference, and this year’s topic was “Micronext: Strategies and Challenges of Social Impact.” The day-long conference was hosted by the Emerging Markets Group at the University of Chicago’s Booth School of Business, U of C’s Harris School of Public Policy Studies, and the Northwestern University’s Kellogg School of Management, and featured several panels and discussions on domestic microfinance, innovations in the industry, technology and impact investment, with opening keynote by Michael Schlein, CEO and President of ACCION International, and a closing afternoon session with David Roodman, author and Senior Fellow at the Center for Global Development.

Michael Schlein discussed the genesis of the industry, beginning with organizations’ realization that “poor people could repay their loans and you could build a business model around that,” and insisting, somewhat controversially, that there is a profit to be made in working with this population. He pointed out that it’s a very exciting time for microfinance, full of great change and great potential. It “shows people that there are markets at the base of the pyramid,” he said. “All the charity in the world will not get you to” the 2.7 billion people who lack access to financial services. Still, “it’s amazing what access to financial services and a very small loan can do,” said Schlein. He also said that we need to get beyond credit, that products such as savings and insurance are crucial to ending poverty. He called upon the industry to employ “new radical disruptions that can break through the existing structure” to “reach underserved areas.” He even expressed the belief that the crisis in Andhra Pradesh would not have happened if those MFIs had taken savings, because, he said, savings position the MFI as a trusted entity and cements the organization’s position in the community.

David Roodman closed the day discussing his new book, Due Diligence: An Impertinent Inquiry into Microfinance, and the scientific experiments and mathematical formulae that he said call into question its effectiveness. A controversial take, his presentation examined several famous studies and discussed his own mathematical evaluations of the findings. He also pointed to anecdotes that refute the effectiveness of the group lending model, although most of the examples he presented came from South Africa, a country where the group-lending model is unusually unsuccessful compared to other developing countries.

Roodman cautioned that organizations expose themselves to risk when they lend to the “poorest of the poor,” but that savings is a bright spot that has a great impact on poverty. He also championed deposit-taking, insurance, and money transfers, and the rollout of technological innovations. He acknowledged that Schlein, and Rupert Scofield (co-founder, President and CEO of FINCA) have been critical of his methods and conclusions in his latest book. Roodman’s Microfinance Open Book Blog cites Scofield’s criticism: “[Scofield] says that I ‘[set] the statistical/methodological bar pretty high,’ so that the body of evidence on which I am willing to rely is thin; and I ‘[overreach] in the sense of drawing bold, sweeping conclusions.’ It is true that I admit only the best evidence.” For his part, Scofield writes that two of Roodman’s conclusions, based on randomized control studies, were conducted with for-profit organizations engaging in “predatory lending,” the reason why it might be difficult to conclude definitively that they were reducing poverty.

Schlein and Roodman bookended the day with messages that reflect the current tenor of public debate about the industry as a whole. Most of the day’s speakers made the point that despite recent controversies, there is enormous growth and potential in the industry, especially through the expansion of technology innovations such as cell phone banking, growing web access and technology that increase clients’ access to these tools. (See my forthcoming blog about the panel, “New Products & Innovations in Microfinance.”) The experts also lauded the regulations and monitoring initiated by leaders in the industry through initiatives such as the Smart Campaign.

The discussion and evolution of modern microfinance continues, and while some of the messages of the day were controversial, the overall theme was a positive one: with current regulations and new innovations, the microfinance industry will only strengthen, growing to meet more of the needs of a greater number of clients even more effectively, reaching more of the unbanked and moving the needle on global poverty.