Today, Thursday, Dec. 1, is World AIDS Day. This year’s theme, Zero new HIV infections, Zero discrimination, Zero AIDS-related deaths, is an optimistic one but there is good reason to hope. The latest Report on the Global HIV/AIDS Response by the World Health Organization (WHO), UNICEF and UNAIDS indicates that increased access to HIV services has resulted in a 15% reduction of new infections over the past decade and a 22% decline in AIDS-related deaths in the last five years. Launched in 1987 by UNAIDS, the Joint United Nations Programme on HIV/AIDS, World AIDS Day is an occasion on which organizations and world leaders hold events to commemorate and raise awareness around the struggles of people suffering from HIV/AIDS. 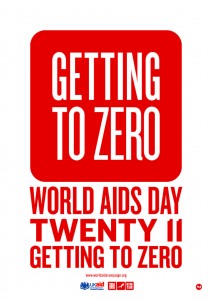 Over the last month, other world leaders have been speaking out in honor of World AIDS Day. U.N. Secretary-General Ban Ki-moon issued a statement: “Heading into the fourth decade of AIDS, we are finally in a position to end the epidemic. […] Synergies between prevention and treatment are speeding up progress. But to end AIDS, we need to deliver even greater results. This year in June, the United Nations General Assembly’s High-Level Meeting on AIDS adopted bold targets for 2015: reduce the sexual transmission of HIV by half, eliminate new infections in children, provide treatment for 15 million people living with HIV, end stigma and discrimination, and close the AIDS funding gap. With strong political will, reasonable financial resources and a firm human rights-based approach, we can achieve all of these targets.”

Secretary Clinton spoke to the National Institute of Health in November about the U.S.’s work to bring about creating an AIDS-free generation, eliminating mother-to-child transmission, preventing infection among adults, and treatment for those already afflicted. “Although the past 30 years have been a remarkable journey, we still have a long, hard road ahead of us. But today, thanks both to new knowledge and to new ways of applying it, we have the chance to give countless lives and futures to millions of people who are alive today, but equally, if not profoundly more importantly, to an entire generation yet to be born.”

At Opportunity International, education through financial, health and life-skills training is an integral part of our services to our clients. In Sub-Saharan Africa, as part of health training modules offered in our banks in Malawi, Mozambique and Rwanda, clients have access to education that promotes better understanding and prevention of HIV/AIDS. We’re committed to life-skills training and education like this in order to improve all aspects of our clients’ lives.

After more than three decades, the global fight against AIDS has come so far, and yet there is still much to do. As Secretary Clinton said, “Our efforts have helped set the stage for an historic opportunity, one that the world has today: to change the course of this pandemic and usher in an AIDS-free generation.”