Conference LiveBlog: Daryl Collins, Co-Author of Portfolios of the Poor: How the World’s Poor Live on $2 a Day

This morning at the Opportunity International Conference, Daryl Collins, co-author of Portfolios of the Poor: How the World’s Poor Live on $2 a Day, spoke from the main stage about the financial portfolios of people in poverty and the impact that savings has to mitigate the effects of their uncertain financial futures. 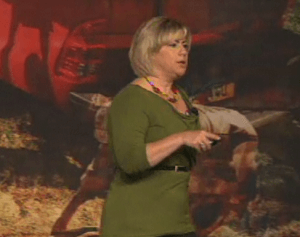 3. People in poverty can and do save.

Informal Savings Clubs
Example: Diary-keeper Nomsa, a 77-year-old woman from South Africa, paid out the equivalent of $9 a month, and on the final month, all the members of the club split the total $99 accumulated.

Informal savings clubs can be a solution but they can unreliable. And the people we surveyed actually save as much as one-third of their income every month. Though savings clubs require so much self-discipline, and sometimes they work well, but they can also be problematic. Someone might abscond with the money or there might be other problems.
In the event of an emergency, informal financial solutions are not sufficient and are not immediate enough. They need more reliable, more flexible and more immediate solutions, such as formal savings accounts and insurance policies.

For people living in chronic poverty, the challenge is not only their low but also their irregular daily incomes, as well as the near-constant financial risk they face. Portfolios of the Poor demonstrates that people in poverty have surprisingly sophisticated financial lives, saving and borrowing with an eye to the future and creating complex portfolios of an average of seven different formal or informal tools, including savings, and they will find a way to save no matter what. Formal savings products, like interest-bearing savings accounts from financial institution, are a reliable way to help individuals plan for the future and contribute much-needed economic stability to their lives. The tragedy is that people in poverty don’t have the right and reliable tools. That’s difference we can make today with Opportunity International.

A bit about Daryl

Daryl Collins is co-author of Portfolios of the Poor and director at Bankable Frontier Associates, a niche consulting practice in Boston, Mass., where she leads research efforts building on an expertise in the demand-side dynamics of development finance. She was the principal investigator of the South African Financial Diaries, and will lead financial diaries studies in Mexico, Colombia, Kenya, India and the U.S. in the next two years. Daryl began her career as an emerging market economist at a New York investment bank before moving to South Africa in the late 1990s, where she ultimately joined the finance faculty of the University of Cape Town. Daryl holds bachelor’s and master’s degrees in economics from the London School of Economics, and a Ph.D. from New York University.