I had the great honor of twice meeting Nobel Laureate Wangari Maathai. The first time was in the frenetic hallways of the Clinton Global Initiative in New York. The second was in a quiet lecture room at the Los Angeles Public Library. While the settings were in stark contrast, Professor Maathai was quite the same in both: powerful, gracious and wise. 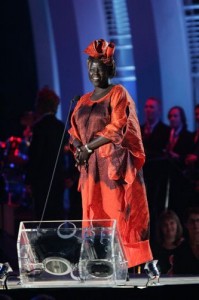 She did not seem to rate the contrasting rooms or the people in them of greater or lesser importance. Her gravity not only drew both rooms to her, it served to keep everyone in them grounded—kneeling in the dirt, serving alongside those in poverty.

On Sunday night, September 25, Professor Wangari Muta Maathai lost her long battle with cancer at the age of 71. The author, former member of Kenya’s Parliament, and founder of The Green Belt Movement was a great champion of issues of social justice, democracy and environmental responsibility. She was born in 1940 in the village of Ihithe, near Nyeri, in the Central Highlands of Kenya and, at a time when few girls received a formal education, her brother encouraged her to go to school. Maathai went on to become the first woman to earn a doctorate in East Africa—in 1971 from the University of Nairobi, where she later was an associate professor in the department of veterinary anatomy—and she also earned degrees from Mount St. Scholastica College in Atchison, Kansas and the University of Pittsburgh.

Professor Maathai won the Nobel Peace Prize in 2004 for her contribution to sustainable development, democracy and peace. Through her work with women living in rural Kenya, Professor Maathai drew attention to the links between environmental degradation and poverty. She encouraged Kenyan women to begin planting trees to stabilize the soil and improve watersheds as well as to provide wood for cooking and fodder for livestock. This work became the Green Belt Movement (GBM) which has mobilized hundreds of thousands of women and men to plant more than 47 million trees, a first step in empowering communities to govern their resources and improve the lives of those in poverty.

Archbishop Desmond Tutu paid tribute to Maathai on greenbeltmovement.org, saying, “Wangari Maathai understood and acted on the inextricable links between poverty, rights and environmental sustainability. One can but marvel at her foresight and the scope of her success. She was a true African heroine. Our condolences go to Professor Maathai’s family, to the people of Kenya, and to the countless women (and men) across Africa and the world to whom she was an inspiration.”

Kenyan Prime Minister Raila Odinga said, “We all knew her as a voice of reason, a lady who stood above our artificial divisions of race, tribe and region and championed the cause of humanity.”

The New York Times reported that Vertistine Mbaya, a long-time friend and fellow professor at the University of Nairobi, said that Maathai showed the world how important it is to have and demonstrate courage. ”The values she had for justice and civil liberties and what she believed were the obligations of civil society and government,” Mbaya said. “She also demonstrated the importance of recognizing the contributions that women can make and allowing them the open space to do so.”

We have lost a great champion. May we be found worthy of her example: humbly yet relentlessly living our lives in the service of others.

View commemorative photos of Professor Maathai at UK’s The Guardian. Express your condolences and view the tributes of international figures at greenbeltmovement.org.

Previous Article
Supporting Rural Farmers, Reducing Poverty and Hunger
Back to Blog
Next Article
What We’re Watching: Opportunity Lifts Up Families with the Support of the Caterpillar Foundation