My First Trust Group Experience, a Traveler’s Report from Uganda

We rose early today and split into two groups with ours visiting a Trust Group in Kampala, which is the bustling capital of Uganda.

We meandered down the shopping district, winding our way through an orderly confusion of shops, street vendors and a sea of humanity. It was hot and dry and the red dust rose over the marketplace like a cloud mixing itself with the heavy smell of outdoor cooking and fumes from the boda bodas as they streaked by. 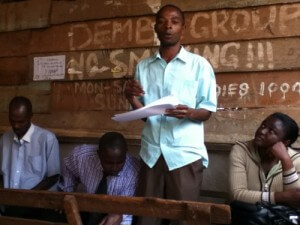 We found our destination, which was one of two wooden covered shelters made from four tree branches and a piece of rusted tin that I am sure had its birth as part of a building. We sat on benches short for our stature.

We waited a few minutes and soon the clients filed in, taking seats and facing us with big smiles, dressed in their most colorful Sunday best. Our interpreter asked us to introduce ourselves, introductions which we delivered in rapid fire as we tried to explain in a few words our place in the world.

The Trust Group chairman opened the meeting. He was a man of 4.8 feet, dressed in green attire, missing a few teeth but laser-focused, in command of his audience, and totally in control of the meeting at hand. You could see in his weather-worn face the intuitive ability to articulate a vision and the presence to lead others. I leaned over to Kevin, a traveling companion, and said, “If they open this meeting by reading the last meeting’s minutes, I will be very impressed.” And with that, a member stood up with his 11×14 notepad of hand-written notes, and standing military straight presented the minutes of the last meeting… Everyone nodded, and then the first order of business was the monthly repayment of loans.

We proceeded to hear stories of the clients’ successes and the beaming appreciation they had for Opportunity‘s services and support. There was a woman who ran a retail banana store, a man who was a banana wholesaler, an owner of a boutique, and a few others. I sat awed, flabbergasted at the formal, Wall Street structure of this meeting. Our chairman, who began with a shoeshine stand, grew it into a retail store, and had educated seven children–three of whom were in politics and four others who had also attended the university–who beamed like the North Star as he told us his story.

Next was the discussion of old business, which began with the review of a contingency fund the clients had created to prepare for a possible default of one of their membership. Then they moved into the current operations of their boda boda messenger, which the group had funded as a new venture and a revenue source. Another member sprang to his feet to suggest that they needed to find and own their own meeting site, a real property investment, and paint it the color of the Opportunity bank. He suggested that they mandate the wearing of t-shirts in their Trust Group colors and create their own brand. He was a marketing officer who any CEO would cherish.

I was so impressed. This whole process was well-organized, carefully thought-out, executed perfectly and, given the environment and personal obstacles each of these clients face, this is an accomplishment that would have rivaled the work of a Harvard Business School graduate. You could see in their beaming faces a clear understanding of what is necessary to be successful. It’s only the “luck of the draw” of their birthplace that this group was not sitting in an office high above Madison Avenue.

To anyone who is working with Opportunity International, or planning to, you must take the time to make a trip like this in order to understand the complexities of the microfinance system, its difficulties and successes, and particular challenges of those persons who happened to be born into a society where opportunity and the entrepreneurial spirit are ill-defined, yet bursting to be released given a chance.

This was truly one of the great experiences in my life…

Insight Trip traveler Bruce of San Francisco, Calif. traveled with Opportunity supporters and staff two weeks ago in Rwanda and Uganda to see firsthand the impact of our Banking on Africa campaign.

Stay tuned to the Opportunity Blog for more from the Banking on Africa travelers.

Previous Article
Meet Thomas, a Loan Officer in Moshi, Tanzania
Back to Blog
Next Article
Support our Clients, Buy a Sevenly T-Shirt